VS Battles Wiki
Register
Don't have an account?
Sign In
Advertisement
in: Tier 9, Tier 9-C, Characters,
and 14 more 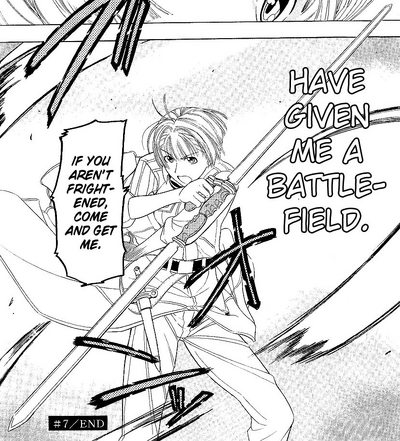 Alice L. Malvin is the third daughter and heiress of the Malvin family, one of the 13 most important noble families of the Empire. She graduated from the military academy just as the war with the Republic of Frost ended. She became the commanding field officer of the Imperial Army's intelligence agency Section III, also known as Pumpkin Scissors, a new section founded after the war to provide war relief and help the citizens of the Empire rebuild in the war's aftermath.

Attack Potency: Street level (Can cut other weapons like swords, can cut into stone tiles and split a metal helmet and shatter two knives with one swing)

Speed: Peak Human (Can fight multiple soldiers, including elites, at the same time, can blitz elite soldiers and elite royal guards, even while tired or half-drowned after being tortured by dunking multiple times)

Lifting Strength: At least Athletic Human (Can wield a heavy sword for significant amounts of time, can lift and throw a person)

Intelligence: Above average (Expert fighter and swordswoman who is also a superior officer and decent tactician. However, she can be impulsive and very aggressive.)

Weaknesses: Can be impulsive and aggressive to a fault.