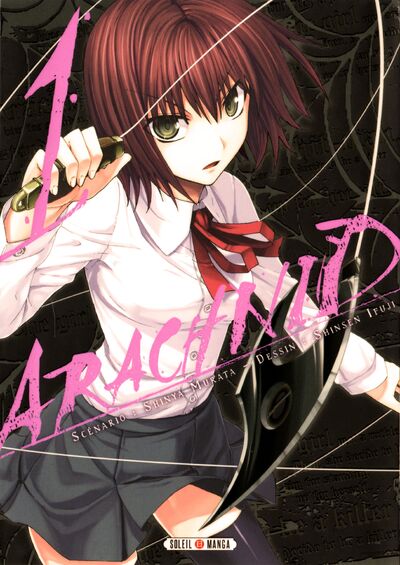 Powers and Abilities: Acrobatics, Thread Manipulation, Enhanced Senses (By using her silk, she is capable to sense vibration and perceive anything in the surrounds, as it were an extention of her body), Body Puppetry (By using her silk), Accelerated Development (Her mental disorder greatly increase her learning rate when concentrating, being capable to learn in one day what a normal person would takes 10 years, and in one second what a normal person would take one hour), Trap Mastery (Set traps either with preparation or in middle combat), Vector Manipulation (Capable to control the trajectory of her silk and knife), Body Control (By controlling her heart rate), Marksmanship, Instinctive Reaction

Attack Potency: Street level (Generally defeat groups of thugs with ease. Kicks down a door. Comparable to Megumi, that destroyed a violin in one strike. A direct hit from her caused Hibiki to bleed)

Speed: Supersonic (Even before starting her training, it barely speedblitzed Kumo, that is comparable to Imomushi), far higher when concentrating (Thanks to her disorder CEC, by concentrating in a single target, she see everything around frozen, to the point that not even Dinoponera's eyes are capable to peceive her)

Durability: Street level, higher with her silk (By wrapping her body in silk, her durability considerable increase, allowing her to tank attacks from Hibiki, Dinoponera, Kamakiri's slice, bullets and more)

Stamina: Extremely high, even after receiving beat downs her concentration do not break, that involve receiving several hits from Hibiki to being impaled several times by the Dino Spike

Range: Vary up to hundred of meters with silk

Standard Equipment: Kumoito, a handled and a blade attached by large thread of silk. The thread is made by of spider's silk, woven from 19000 individuals, capable to hold up to 600 kg and resist 1500 degrees of heat, its 7 times stronger than iron and twice the elasticity of nylon. Using the threads, Alice is capable to store oxygen for more than enough time to be 10 minutes underwater and they are imperceptible to the human eye. She also carries a gun

Intelligence: Extremely high, her mental conditions allows her to adapt to virtually any situation. This is due her mental disorder, Congenital Excessive Concentration (CEC), that increase Alice's concentration to the point that it blocks anything else aside her an her target or task, causing an excess of recognition, analysis, judgement and determination. After analysis Dinoponera's combat ability, Alice is capable to use the Congenital Manipulation of Concentration (CMC), that allows her to increase her heart's rate, increasing as well her concentration and reactions, to the point that she sees everything frozen in time.