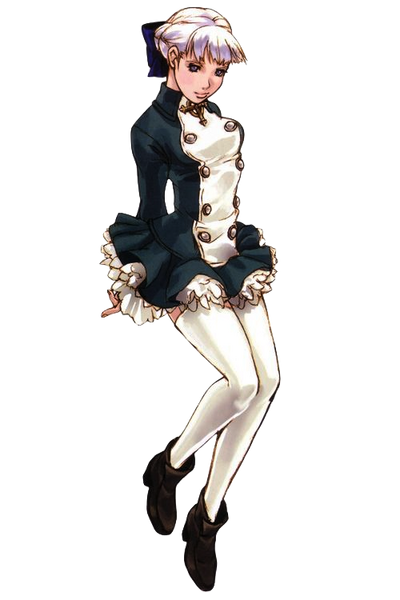 Alice Elliot is the main protagonist of the video-game Shadow Hearts, she has a link to the divine that affords her holy powers and was trained as an exorcist by her father before he died. Alice is kind-hearted and pure which strongly contrasts the games main hero, Yuri, whom she falls in love with. She is also and Gepetto's late wife's niece, from Shadow Hearts: Covenant.

Raised in London, Alice began to hear supernatural voices at a young age and she works with her father as an exorcist, traveling throughout Europe banishing demons. She was actually born with a rare and hidden power, something highly desirable to the villains. Her father dies protecting her from Bacon during an incident in Rouen. She is saved by Yuri when she is nearly abducted by Bacon a second time at the very beginning of the game, and from there Yuri promises (because of the voice in Yuri's head) to protect her in their travels. She is shy and introverted at first, but her perky personality returns as she embarks on her journey with Yuri Hyuga. Alice is a healer and not a fighter and it is shown through her powerful white magic she learns as her journey continues.

When the Four Masks come to claim Yuri's soul, Alice offers her own to them in order to spare him, essentially transferring Yuri's Curse to herself. She succumbs to the Curse during a train ride with Yuri, dying in his arms six months before the events of Domremy. Her body is buried in Zurich with Yuri's brown overcoat. In Covenant the last remnants of her spiritual essence took up residence in Yuri's Graveyard, watching over him from afar. The Curse of the Holy Mistletoe is no match for her love for Yuri. It is implied that the timey-wimey time travel at the end of Covenant makes it possible for Yuri to save her (which leads to the good ending in the original Shadow Hearts). Developers unveiled in an interview within the Japanese Shadow Hearts: Covenant guidebook that this is the 'canon' conclusion to the game. So both endings are canon.

Classification: Human Exorcist, Key of Light (a being born every century, who acts as a conduit/embodiment of sorts to light/positive magic)

Attack Potency: Planet level (Albert Simon and Dehuai wanted her powers to invoke the forbidden Valorization to summon the Meta-God)

Speed: FTL (Should be comparable to Margarete and Zhuzhen who fought Yamaraja: Wind who can travel at the speed of light early in the game, and Alice has fought Soul Block who has speed of light attack speed)

Durability: At least City level (survived Seraphic Radiance's attack that wiped out Shanghai), likely much higher (due to taking part in fighting Meta-God)

Intelligence: Was raised by a member of the Catholic Church and her training as an exorcist, capable of banishing demons and is the main support and healer of her group.

Weaknesses: Pretty much a glass cannon

Retrieved from "https://vsbattles.fandom.com/wiki/Alice_Elliot?oldid=4106257"
Community content is available under CC-BY-SA unless otherwise noted.