VS Battles Wiki
Register
Don't have an account?
Sign In
Advertisement
in: Tier 9, Tier 9-B, Tier 9-A,
and 50 more 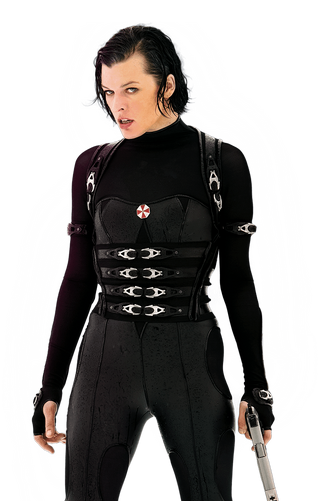 Alice was a leading party in the conflict against the Umbrella Corporation during the Global T-virus Pandemic. Originally a high-ranking Umbrella security operative, she joined a deep cover operation by members of the US law enforcement to reveal the company's illegal viral research data to the world. This plan ultimately failed when her co-worker, Spence stole the virus samples with the intention of getting rich on the black market and leaked the virus into the lab to kill the research staff in the confusion. Both Alice and Spence were knocked unconscious when the security system released noxious gas and were rendered amnesiac.

Infected after escaping the Zombie-infested facility, Alice was taken away by Umbrella for testing. Enhanced by a T-virus infection; cured and re-infected, Alice became the test subject of an Umbrella research project designated "Project Alice"; granted with superhuman abilities, she was able to survive the viral outbreak in Raccoon City and several years of the T-virus' spread across the Earth. As she had not succumbed to the T-virus and transformed into a Zombie, the acquisition of Alice became a major goal to the company as a means of surviving the pandemic. Alice ultimately crippled Umbrella's leadership nonetheless, paving the way for its Red Queen computer system to take full control of its remaining assets, now intent on humanity's destruction. Unknown to Alice, this was another Umbrella ploy to wipe out humanity, a ploy that was highly successful. After exposure to the T-Virus, Alice's abilities became enhanced. Following the fall of Washington, DC, Alice was contacted by the Red Queen to bring a final end to the Global T-Virus pandemic and Umbrella. With the help of Claire Redfield, Alice returned to the Hive where she discovered her true nature as a clone of Alicia Marcus. With the aid of the Red Queen, Claire and Alicia, Alice destroyed the Hive and Umbrella and unleashed an anti-virus capable of bringing an end to the global pandemic.

All form before plus Superhuman Strength, Speed, Durability, Resilience, Agility and Reflexes, Infection Empowerment, Accelerated Healing and Recovery, Can sense the infected and enhanced hearing

All from before plus stronger with psionic powers including telekinetic abilities, Durability Negation, limited Technology Manipulation (can interface with technology), Resistance to electrical currents and tech-based Mind Control, Shockwave Generation, Have a psychic link with her clones (which can also enable her to progressively learn from them), Can kill by thinking

Attack Potency: Wall level (Decapitated a large zombie, 12 Gauge shotgun harmed and killed an Axeman. Killed multiple armored Umbrella soliders while hanging upside down. Can kill zombies physically. Cut off Dr Issacs' hand with a knife), at least Small Building level with explosives (Annhilated an Uber Licker, destroyed The Hive by chain reaction) | Wall level (Overcame the latest B.O.W., the Nemesis in H2H combat) | Small Building level (Blew Tyrant across the room and through a wall, destroying most of the corridor of the mansion), can bypass conventional durability with psionics

Speed: At least Peak Human (Did mid-air flips in long distance jumps. Slided down to prevent an axe thrown by an Axeman), Subsonic with bikes and vehicles, Subsonic+ RPGcombat speed and reactions (Dodged a missile. Dodged an RPG) | Superhuman movement (Avoided being blown up and shot), Subsonic+ combat and reaction speed (Has consistently avoided bullets) with Supersonic+ attack speed with guns

Durability: Wall level (Survived a VTOL crash. Survived an explosion. Got smashed through thick glass. Crashed into a pipe while riding a motorcycle. Got slammed into a wall by an Axeman. Took hits from Rain who could easily break bones. Survived a VTOL crashing near her) | Wall level (Took hits from Nemesis into a concrete pillar. Got hit by a helicopter shrapnel thrown by Nemesis) | Small Building level (Tanked hits from Tyrant's psionic blast)

Intelligence: Gifted; Very skilled and cunning combatant with experience, skilled with various forms of weaponry and is able to improvise weapons from random debris, capable in leadership, uses ingenuity and unconventional methods to defeat stronger opponents, likely has knowledge and experiences of her clones

Weaknesses: Missing three left fingers by the end of the series | Anti-virus | Anti-virus. Use of her psychic abilities can cause her head pain or even render her unconscious, resulting in them rarely being used in battle (it is unknown whether or not she retained the weakness due to one of her clones not having it). Prefers to retain her humanity by becoming a normal human

Key: Base | Empowered with T-virus | Revived with new T-virus

After Alice's exposure to the T-virus, via experimentation conducted by the Umbrella Corporation, the virus somehow bonded with her in a way that was not seen in others who were infected. In short, she gains all of the T-virus' "positive" effects and none of its negative effects like the deceasing of higher brain function, cannibalistic cravings, and eventual decomposing or rotting flesh. The virus gave her enhanced strength, resilience, agility, reflexes, and accelerated healing and recovery. A display of her physical abilities is demonstrated in Apocalypse when she defeats the latest B.O.W., the Nemesis (Matt Addison). She is also able to dispatch human foes with ease, such during her time with the psychopaths in Extinction, she killed one of them with a single kick to the face, which presumably snapped his neck. She was durable enough to be barely affected when being tasered and regained full use of her finger after snapping it back into place.

By the end of Apocalypse, she develops telekinetic abilities by added experimentation. While escaping from the Umbrella Detroit facility, her telekinetic abilities were displayed when she caused a guard watching her from a surveillance room to bleed from every orifice, killing him slowly, after making her face appear on every screen in the room. It is possible that her ability to project her face on the screens is somehow related to Isaacs having developed a way to control her via satellite, suggesting she gained some form of interface with technology. Alice's telekinetic abilities were used four times in Extinction, first to levitate her motorbike (and several rocks) while dreaming, then to deflect the fire used to kill the crows, then to frying an Umbrella satellite's processor as it tried to control her and lastly to deflect a mutated Dr. Isaacs with a shockwave-like blast, stopping his tentacles and blowing him across the room and through a wall. The blast was powerful enough to destroy most of the corridor of the mansion similarly to an explosion. Use of her psychic abilities can cause her head pain or even render her unconscious, resulting in them rarely being used in battle. Also, the White Queen was able to detect "psionic activity" in the form of alpha and beta waves whenever Alice used her powers.

In Resident Evil: Afterlife, Alice's clones were shown to possess telekinesis and could use it on the same level she could, with one of them being able to destroy an entire room with a shockwave blast. They also displayed signs of Alice's heightened speed and agility, as they fought Wesker's men and guards. As Alice confronts Wesker on a chopper after he has blown up his facility, he injects her with a serum that destroys the T-cells in her body from the virus and thus renders her powerless. Alice actually thanks Wesker for this as it allows her to become a normal human again. Even without her powers, Alice retains the same level of confidence and fighting skills as she possessed with them before when she was a security operative of the Hive, and is even able to defeat an empowered Wesker (who had similar powers to her own) without her powers, using her own cunning and skill. In Resident Evil: Retribution she is able to defeat the empowered Rain without her powers as well through sheer ingenuity.

She is also a skilled combatant, being able to fight even with her hands bound. An example of her hand-to-hand combat prowess is shown when Bennett holds her at gunpoint, then she quickly disarms and kicks him. Alice is skilled with various forms of weaponry and is able to improvise weapons from random debris. In Afterlife, for instance, Alice wields a pair of sawed-off shotguns that fire custom "coin-shot" ammunition. Alice was capable of holding her own against various bioweapons. She has a superb level of precision and accuracy that surpasses others in the series. In Afterlife, she was able to shoot and hit two of the Undead while in midair. While running, she accurately shot multiple moving Undead targets in the head. During a confrontation with Wesker, she slams a surgical table then kicked a scalpel tray towards him in midair. Alice also displays a level of marksmanship superior to that of Wesker. In the Final chapter, while suspended in the air by a rope trap, she was able to hold her own and kill multiple Umbrella operatives.

However, during her battle with Isaacs she was only able to win with the help of one of her clones. Alice tricked Isaacs into a laser security system which she knew could kill Isaacs (even with his enhanced regenerative capabilities, faster than her own). If not for her clone deactivating the system on time Alice would have shared the same fate as Isaacs. This still shows her cleverness and courage in battle, a trait that has kept her alive in her battles.

At the end of Resident Evil: Retribution, Albert Wesker injects Alice with the T-Virus, instantly restoring her powers, which she threatened to kill him for. In The Final Chapter, while Alice has the T-virus inside of her, she displays none of her former powers. The Red Queen states that Wesker only pretended to restore her powers. All of her T-virus cells and any abilities they may have granted her are eradicated by the anti-virus at the end of The Final Chapter.