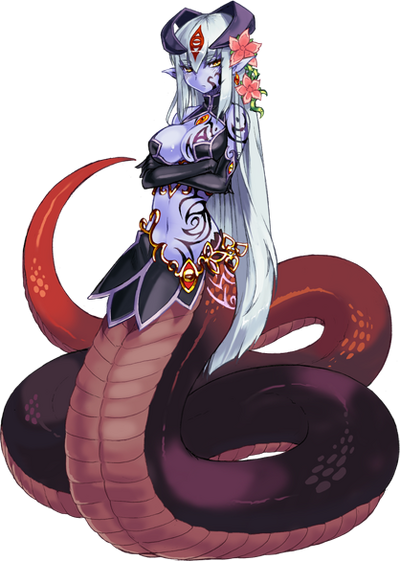 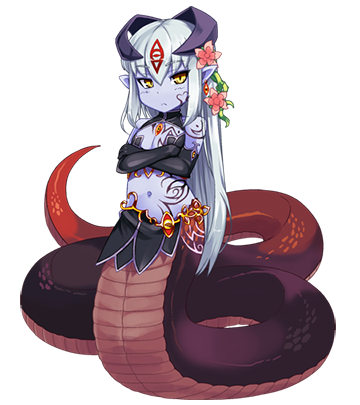 Alipheese Fateburn XVI, also known as Alice is the 16th Monster Lord that rules over monsterkind. She was crowned Monster Lord after the death of her mother several years ago. She had to defeat 4 other monsters who were also candidates for the role of Monster Lord. These four monsters eventually became the Four Heavenly Knights.

As her mother was killed by heroes, she grew up resenting humankind, although she always kept her mother's last wish of peace between humans and monsters and prevented monsters from attacking humans. After a failed attempt at killing Ilias, she met up with the new (fake) hero Luka. Despite mocking his childish goals of coexistence at first, she quickly joined him on his quest to "beat the monster lord", with Luka unaware of her true nature.

However, as Luka progressed through his journey, he eventually realized that the Monster Lord wasn't the cause of the strained relationship between humans and monsters, thus changing his goal towards defeating the Four Heavenly Knights, as they're the ones actively attacking humans.

After the Heavenly Knights' defeat, Goddess Ilias revealed herself as the true antagonist of the game, ordering an attack on every major city in the world and sealing up Alice. Alice managed to partially evade the seal under a weaker form and continued to fight alongside Luka even in her weakened body. She was eventually unsealed and participated in Ilias' defeat.

Attack Potency: Multiverse level+ (Bruised Ilias' face. Later fought Dark Goddess Ilias. Comparable to Luka) | Unknown (Stated to be reduced to 10% of her power. She is able to slightly wound enemies comparable to Luka, but it is unknown how truly strong she is)

Intelligence: Gifted (Should be smarter than the average monster due to being the Monster Lord. She was trained in several subjects from a young age, including subjects like thermodynamics. Officially considered to have "High" intelligence)

Standard Tactics: She usually doesn't bother fighting her opponents directly and prefers to incapacitate her opponents through her diverse Demon Eyes techniques, although she will resort to strong magical attack if she fights someone she knows to be immune to said techniques.

Retrieved from "https://vsbattles.fandom.com/wiki/Alice_(Monster_Girl_Quest!)?oldid=6823423"
Community content is available under CC-BY-SA unless otherwise noted.