VS Battles Wiki
Register
Don't have an account?
Sign In
Advertisement
in: Tier 9, Tier 9-B, Tier 8,
and 25 more 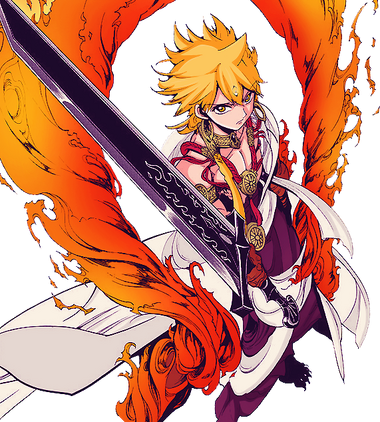 Alibaba Saluja (アリババ・サルージャ, Aribaba Sarūja) is one of the two main protagonists of the Magi series together with Aladdin. He is the former third Prince of the Balbadd Kingdom. He was working as a cart driver when he first met Aladdin. He was the co-leader of the Fog Troupe. Alibaba is the owner of the Djinn Amon. He is a Dungeon Capturer, capturing one Dungeon, and Aladdin's King Vessel. He has allied himself with Kou Empire and became Kouen Ren's subordinate. He opens the Fanfan company for the Kou Empire and later establishes his own company called the Alibaba trading company.

Superhuman Physical Characteristics, Expert Swordsman, Magoi Manipulation, Enhanced Senses, Extrasensory Perception, Transformation (Can djinn equip), Magic, Fire Manipulation, Absorption (Is able to absorb fire to repair and/or strengthen his metal vessel), Statistics Amplification and Durability Negation (Magoi Manipulation can reinforce and strengthen weapons and do internal damage), Social Influencing (He used his knowledge of trading to save a country on the verge of bankruptcy because of his skill in politics, trading and way of communication), Resistance to Fire, Curse Manipulation (Showed abnormal resilience to the Curse of Death), Empathic Manipulation (Broke free from the Holy Mother Halo Fan), Minor Resistance to Water (He can use Amon's Sword underwater)

Flight, Can break barriers with his djinn enchanted sword, Fire Manipulation, Resistance to Fire and is able absorb fire to repair and/or strengthen his metal vessel

All previous abilities in addition to Self-Perception Manipulation, Instinctive Reaction, and Analytical Prediction with Life Review (Alibaba can control his perception of time to make any moment seem like an eternity, allowing him to read his enemy's movements in combat and easily dodge attacks), Non-Physical Interaction and Dimensional Travel (Only in Spirit Form), Supernatural Willpower (He was able to maintain his sanity after watching his life up to his death over and over again and also experienced 100-200 years of the Great Magic Influence without losing his sanity), Acausality (Type 4), Resistance to Soul Manipulation and Mind Manipulation (Unaffected by Sacred Palace Sinbad rewriting the system of the Rukh, which governs souls and fate and altered the minds of the entire planet).

Stamina: Very High. He's able to survive an attack from a Kou experiment monster, who's equivalent to Masrur, who could kick someone through a forest. He's also able to take internal damage and continue fighting. He also keeps on fighting after suffering from multiple serious injuries including his arm being bitten and broken. He's even able to continue fighting even when he's exhausted and running out of magoi. He can maintain his sanity after watching his life up to his death over and over again and can also experience 100-200 years of the Great Magic Influence without losing his sanity.

Standard Equipment: Amon, his sword that functions as a metal vessel.

Alibaba is a very talented swordsman. He spent alot of his childhood being trained in Balbadd Royal Swordplay. Balbadd Royal Swordplay is similar to Saber Fencing, where you put your unused hand behind your back, or against your chest, while using your one handed sword, as to protect a potential vulnerability or keep it out of the way. However, Alibaba utilizes his other hand as support for more agile and swift dodges.

In his fight against Jamil, he was able to easily read and dodge all of Jamil's moves, and call out his every opening, just as Jamil's master had done to him. Despite learning Royal Swordplay for years, he was still bested by a very casual Alibaba.

Alibaba was also taught by Sharrkan, another extremely powerful master swordsman. Alibaba was able to also utilize Sharrkan's fighting style on top of his normal sword style, The Crawling Sword Style, which is described to be snake-like and very hard to predict against Toto. He managed to defeat her while she was using Magoi Manipulation to reinforce her strikes, and Alibaba not even using his Dijin Weapon equip.

Alibaba is also very intellectually gifted. He was given a high level of education possible in the Royal Palace of Balbadd after the king adopted him. He knows difficult languages like the Torran Language and possesses high knowledge. He also solved the problems of a country on the verge of bankruptcy and helped create new laws using his skills in politics and trading and his way of communicating with others.

After his time in the Dark Continent, he has gained a plethora of knowledge from the Alma Torran magicians of that age. At that time he also gained the ability to increase his concentration in order to think faster and get more information far faster than a regular human, this allowed him to go through all documents related with the Kou Empire, a normal human would need several years for this feat while Alibaba managed it in less than two weeks.

Weaknesses: Overusing his magoi reverts him back to base.

Amon: The Djinn of Posterity and Politeness, he grants Alibaba the ability to control fire in a number of different ways.