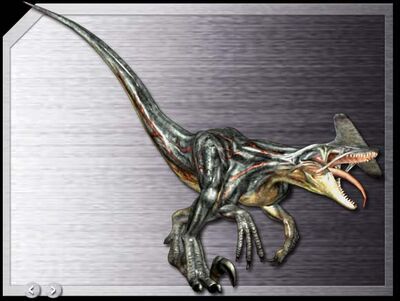 Algol Algol is an genetically-engineered species of human-Velociraptor Hybrid which was created by MTHR-248, the shipboard AI for Ozymandias.

When the human passengers died from radiation sickness, MTHR was tasked by Captain Satoko Evans with creating a new crew. Finding humans to be too fragile to the effects of cosmic radiation exposure, DNA was spliced with that of Dinosaurs left on record some time after the Noah's Ark Plan. Algol was one of the first such attempts.

Retrieved from "https://vsbattles.fandom.com/wiki/Algol_(Dino_Crisis)?oldid=5812693"
Community content is available under CC-BY-SA unless otherwise noted.