VS Battles Wiki
Register
Don't have an account?
Sign In
Advertisement
in: Tier 8, Tier 8-A, Characters,
and 27 more 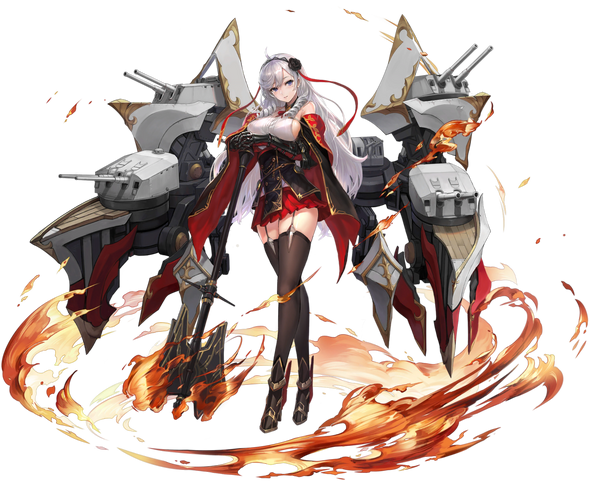 The personification of the Algérie-Class Heavy Cruiser Algérie. She was the last treaty cruiser constructed for French Nayvy, built in response to the Zara-class cruiser heavy cruisers. Her name was used to honour the 100 years of French colonial rule of Algeria.

Tier: 8-A, higher with the Black Cube

Attack Potency: Multi-City Block level (Shipgirl have power greatly exceeding that of normal warships. Fought against Richelieu and Royal Navy ships[1], although she was ultimately overwhelmed later on. Held her own against Littorio for a while[2]), higher with the Black Cube (Much stronger to unknown extent, which makes the Royal Navy fleets terrified to face her)

Speed: Superhuman with Supersonic+ reactions and combat speed (Shipgirls can react to gunfire and torpedoes. Should be comparable to Zuikaku who can react and intercept missiles)

Durability: Multi-City Block level (Capable of surviving attacks from other ships, who are comparable to her in strength), higher with the Black Cube

Stamina: At least Peak Human, likely Superhuman (Ships are capable of fighting waves of enemies without getting tired, and some can even do so while being injured. Shipgirls can travel a long distance through sea for many days without rest. Should be somewhat comparable to META Shipgirls who can fight for an endless amounts of time)

Intelligence: Gifted (Algérie is the most trustworthy strategist of Vichya Dominion, and was for Iris Orthodoxy before the conflict. When facing against the overwhelming force of Royal Navy, she managed to utilize artillery installations, strategic acumen in coming up with a plan to overcome the difference in the fleets' strengths[1]. Her strategic value was praised by Richelieu, the lead ship of Iris Libre.)

Weaknesses: Black Cube can force shipgirl undergo METAmorphosis, thus her body and mind will get corrupted, make her go berserk if she uses it. Otherwise none notable