Alfred (Curse of the Moon) 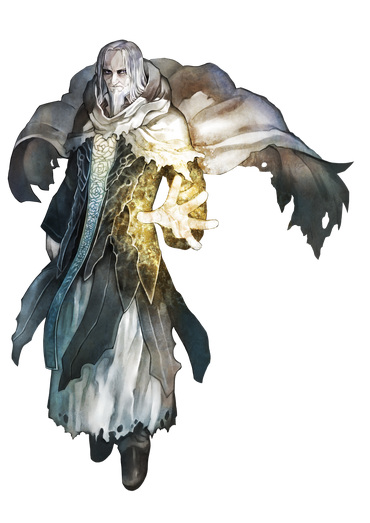 Alfred the Alchemist is he second companion that Zangetsu rescues, from Focalor, on his quest in the castle. Together with the Shardinders Miriam and Gebel, they travel to the top of the castle where they confront Gremory. They managed to defeat her, but not before she unleashes a devastating attack for which Zangetsu sacrifices himself in order to save his companions, and they manage to escape. Because of this Zangetsu succumbs to the curse and becomes a Dark Lord. Alfred, with Miriam and Gebel venture back into the castle to defeat their friend and attempt to save his soul.

Origin: Bloodstained: Curse of the Moon

Powers and Abilities: Superhuman Physical Characteristics, Non-Physical Interaction (He can hurt and kill ghosts), Magic, Fire Manipulation (With Burning Sphere), Ice Manipulation (With Frostcalibur); Electricity Manipulation and Homing Attack (With Voltaic Ray); Duplication (With Soul Vision), Power Nullification (He is able to completely nullify an enemy's attack by using his own) and Damage Reduction (With the Armor)

Attack Potency: City Block level+ (More powerful than demons such as Glutton Train that can do this) | Mountain level (Defeated Andrealphus, who is able to create storms of this magnitude) | Moon level (Was able to defeat Gremory)

Range: Extended melee range with his staff, tens of meters with his spells

Intelligence: Gifted (One of the best alchemists and considered extremely intelligent even among everyone in the Alchemist Guild)