VS Battles Wiki
Register
Don't have an account?
Sign In
Advertisement
in: Tier 5, Tier 5-A, Characters,
and 34 more 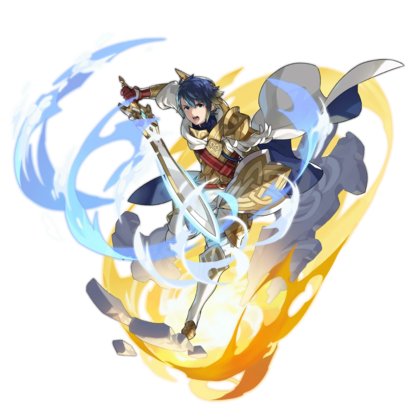 Alfonse is a crossover character who first premiered in the mobile game Fire Emblem Heroes. During a heated struggle against the forces of Embla, he, alongside Fjorm, Marth and Veronica, were suddenly sucked into a hole in space and time thanks to the meddling of Loki and wound up in the world of Alberia. After awakening, he quickly found Veronica, who was suffering from amnesia, and vowed to help her until they could figure out how to return home. When Euden and his allies from the Halidom confronted them, thinking Veronica was leading a group of imperial soldiers to cause havoc across the countryside, Alfonse bade Veronica to flee while he took the whole group on by himself. After their fight was interrupted by Fjorm, who explained their situation to the Alberian natives, they soon joined forces and agreed to help stop Loki and return all of the Heroes back to their home in Askr.

Tier: At least 5-A, higher with Shapeshifting

Powers and Abilities: Superhuman Physical Characteristics, Skilled Swordsman, Portal Creation, Shapeshifting (Can change into any dragon that Euden has formed a pact with for a limited time), Magic, Light Manipulation, Non-Physical Interaction (Can harm ghosts), Paralysis Inducement, Statistics Amplification (Blue Radiance increases strength by 20% for a short time; Mag Mell increases strength by 40%; Strength is increased by 6% when at 60% health or higher; Increases strength by 40% for a short time and 10% for the rest of the fight when health drops below 30%; Strength is increased by 15% whenever an attack that would have cursed him lands; defense is increased by 3%; Gains additional strength and health with wyrmprints), Statistics Reduction (The Free-Spirited Opera wyrmprint reduces one's own strength by 10% and has a 10% chance to lower the opponent's strength by 10% for a short time), Forcefield Creation (The wyrmprints A Brief Repose and A Bouquet can bestow a one-time shield which can block up to 30% of his health in damage and a life shield that blocks damage up to 15% his total health respectively), Self-Healing (Sol heals 5% of all damage dealt to the opponent; Wyrmprints with the Last Recovery or Healing Doublebuff effects gives the user a 14% regen buff when HP is below 30% HP or a 3% regen buff when granted a defense buff, respectively), Resurrection (The Beneath the Boughs wyrmprint sacrifices 50% of the user's dragon gauge to bring them back to life if they get killed in combat), Instinctive Reaction (With The Genius Tactician, the user is able to dodge any reasonably avoidable attack automatically once every 30 seconds), Power Nullification (Via Fury Penetrator and Frenzy Res), Damage Boost (His skills deal more damage if the opponent is paralyzed, with Sol also dealing more damage the lower health Alfonse has; Conditionally via Copy Punisher; Passively increases dragon gauge fill rate by 15% and skill gauge fill rate by 10%; Various wyrmprints increase his flurry strength, his force strike strength, his strength when attacking an opponent in a broken state, etc.), Various abilities via shapeshifting, including Fire Manipulation, Water Manipulation, Air Manipulation, Electricity Manipulation, Darkness Manipulation, Poison Manipulation, etc., Resistance to getting cursed, Statistics Reduction via Dull Res and Enervation Res, Petrification via Petrify Res, and damage from specific High Dragons

Attack Potency: At least Large Planet level (Should be comparable to Berserker and Base Euden, who could fight dragons such as Midgardsormr on even footing), higher with Shapeshifting

Speed: At least Massively Hypersonic+ (Able to dodge direct cloud-to-ground lightning attacks from the likes of Jupiter and Thor)

Lifting Strength: Likely Class Z (Should be comparable, yet inferior, to Ifrit, who pushed the moon out of a solar eclipse)

Intelligence: Above average (Is an extremely capable leader and well versed in combat)

Weaknesses: His power to open gates can run rampant within the world of Alberia, causing otherworld tears to open accidentally which can spill out black mana and spawn fiends

For a list of different weapons and wyrmprints, as well as their different effects in battle, see here and here.

For a list of Void Weapon bonuses and what abilities they equate to, see here.