Alexander Gallen (アレクサンダー・ガーレン, Arekusandā Gāren) was a patriotic fighter hailing from Russia that participated in the Underground Arena in the Maximum Tournament Arc.

In the second season of anime, his name was changed to Andreanov Garland (アンドレアノフ・ガーランド, Andoreanofu Gārando), and in the English dub his name is pronounced "Zeigan/Zargan".

Attack Potency: At least Small Building level (Could seriously damage the reinforced concrete/steel walls of the Underground Arena with utter ease as well as shake the entire building, defeated an off-guard Hanayama with a single german suplex and gave Jack Hammer a good fight.)

Speed: Supersonic (Faster than Hanayama and matched a casual Jack)

Lifting Strength: At least Class 10, possibly higher (Strong enough to uproot massive tree stumps, smaller ones require up to 6 metric tons of force, and could flip a full mine cart that was bigger than him)

Stamina: High (Could go on after having some of his fingers bitten off and this only pissed him off more, plus even after Jack damaged his heart he wanted to continue fighting, but couldn't)

Range: Extended melee range due to size (Bigger than Hanayama or Jack)

Intelligence: Average (Excellent wrestler, potentially the best in all of Russia, but extremely brutish and easily angered) 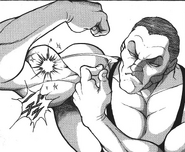 Showing off his tough skin

Height & Weight
Add a photo to this gallery

Retrieved from "https://vsbattles.fandom.com/wiki/Alexander_Gallen?oldid=5896613"
Community content is available under CC-BY-SA unless otherwise noted.