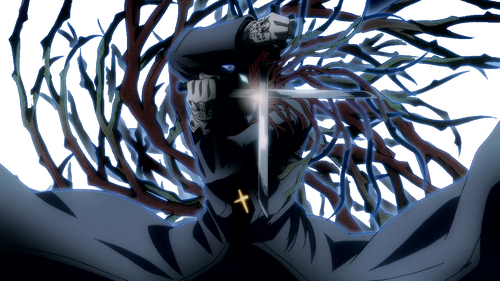 Father Alexander Anderson is the Spearhead of Vatican Section 13, the Iscariot organization, and is Alucard's arch-nemesis. He is a righteous priest of the Vatican who seeks to end Alucard, even if it costs him his humanity.

Powers and Abilities: Superhuman Physical Characteristics, Regeneration (Mid-Low), Immortality (Types 2 and 3), Forcefield Creation, Holy Manipulation, Sealing, Teleportation, Expert Bayonet Wielder, Limited Power Nullification (Can negate basic vampire regeneration via his holy bayonets) | Same as before, along with Regeneration (High-Mid, can regenerate as long as the stake in his heart isn't pulled out)

Intelligence: Gifted. As the Church's greatest fighter, Anderson is an incredibly skilled combatant and the one Alucard pegged as the human most likely to kill him in the modern era. He is able to match Alucard in close combat and even slice off his head and casually incapacitated Seras Victoria. He is extremely well-versed in all manners related to the Church and is thus able to use all of his equipment with ease, throwing his holy bayonets with pinpoint accuracy and utilizing the pages of the Bible to create forcefields and teleport where he pleases.

Weaknesses: Regeneration cannot regrow limbs blown off by equipment like Alucard's Jackal | If the Nail is ripped out, it rips out his heart with it, killing him.