VS Battles Wiki
Register
Don't have an account?
Sign In
Advertisement
in: Tier 9, Tier 9-A, Cats,
and 16 more 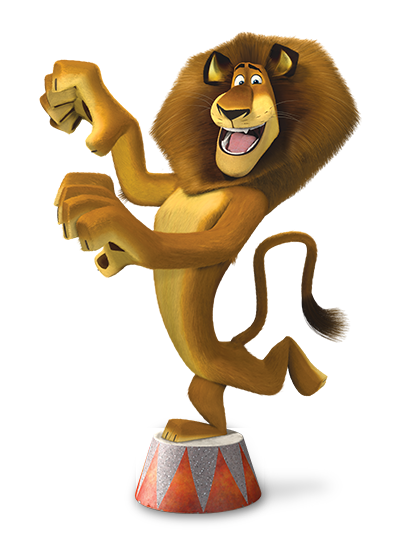 Alex (born Alakay) is a male African lion. Alex is headstrong, protective and self-proclaimed leader of his friends. He is best friends with Marty the zebra. He is used to the life of comfort in the zoo, but learns to adapt to the wild. He's smart, quick at thinking and fast on his feet. He is a dancer by nature, often impressing others with his aerobatic feats. He does tend to be a little self-absorbed, often not seeing the problems of others above his own.

Powers and Abilities: Superhuman Physical Characteristics, Natural Weaponry (Via claws and teeth), Toon Force and Elasticity (Consistently reshapes himself after getting flattened by Gloria), Expert Acrobat, skilled tactician, Enhanced Senses, Master Martial Artist (Despite his pacifistic nature, he was able to briefly fight with Nana and Chantel Dubois), Weapon Mastery, Vehicular Mastery (Has similar experience to the penguins when it comes to driving vehicles), Underwater Breathing (Type 3, via scuba diving equipment)

Attack Potency: Small Building level (Far, far superior to the average lion. Defeated an entire regiment of fossa. Not much weaker than the rest of his gang, including Gloria, who was capable of breaking a large hole in a brick wall. He has consistently fought against Marty, and is on par with the Zaragoza circus animals, who are all this strong. Destroyed a telephone booth. Traded blows with Nana, who survived being beatdown by the Penguins, getting hit by a speeding safari bus and also tanked her own apartment exploding. Traded blows with Chantel Dubois many times and eventually defeated her in their final fight)

Speed: Subsonic (Kept up with and eventually overwhelmed Chantel)

Lifting Strength: Class 100 (Easily lifted Gloria, a hippo, Melman, a giraffe and Marty, a zebra, all at the same time on multiple occasions. Pushed back Chantel Dubois multiple times)

Durability: Small Building level (Took hits from Chantel. Also has numerous feats on this level, like surviving high falls, being tossed through walls, getting flattened by Gloria falling on him multiple times in a row, wooden crates, cars, being shot out of a cannon with the force of over a hundred dynamite sticks, etc.)

Standard Equipment: Recon equipment (minus guns, unless he chooses to), vehicles, scuba diving equipment and many more

Intelligence: At least Above Average. Capable of planning and carrying out intricate stealth missions in difficult locations and carrying them out without losing focus. Is also knowledged in multiple forms of martial arts, and is an extremely skilled athlete.

Weaknesses: Usually a pacifist. Upon going delirious with hunger and nearly killing his best friend Marty, he sunk into depression and went into a self-imposed exile until he regained his resolve to reach his homeland. None notable when he gets serious.

Legosi (Beastars) Legosi's Profile (Search for the Culprit Legosi was used, both were bloodlusted, and speed was equalized)