VS Battles Wiki
Register
Don't have an account?
Sign In
Advertisement
in: Tier 4, Tier High 4-C, Characters,
and 96 more 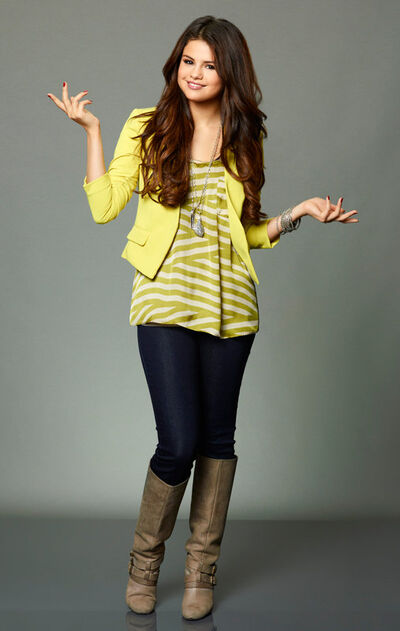 Alexandra Margarita "Alex" Russo is the main protagonist of the fantasy-teen sitcom, Wizards of Waverly Place. She is the daughter of Jerry and Theresa Russo, and sister to Justin and Max Russo; she is the middle child and only daughter. As of the finale of the season, she is the Family Wizard after winning the Family Wizard Competition. She is currently in a long-term relationship with werewolf Mason Greyback, whom she met in the third season.

Attack Potency: Large Star level (Comparable to Ronald, who was able to move several stars in the sky), able to ignore durability in many ways. Unknown with the Stone of Dreams (Capable of reverting any spell or granting any wish with it[1])

Speed: Average Human with Superhuman reactions (Is able to keep up with Justin who was able to play ping pong with a dozen balls at once), Subsonic flight speed with magic carpet, far higher attack speed with various spells

Lifting Strength: Average Human physically, Multi-Stellar with Telekinesis (Comparable to Ronald, who was able to move the stars in the sky)

Durability: Human level, possibly much higher (Comparable if not superior to mortals like Mr. Laritate who survived being struck by a piece of an asteroid that destroyed his school)

Range: From a few dozen up to several hundred meters with standard spells. Galaxy+ with teleportation, she can send herself and another person this far. (1:30 mark). A few hundred years in the past and future with time travel, likely higher since she just needed to specify the time period for the spell. Planetary with time stop, possibly higher. It isn't specified if they need a certain device or not to do this. This time stop lasts for a year. Another variation lasts as long as the user can stand on one leg.

Intelligence: Skilled with a large variety of spells, is the most powerful wizard of the current generation. She's very manipulative, using everyone's weaknesses to her advantage. Extraordinary Genius with Smarty Pants (gives her superior knowledge on "everything there is to know")

Standard Tactics: Unknown, depending on the situation, but usually seen with any sort of molecular, elemental manipulation, reality warping and all others. Alex's favourite spell is Rainon Chainon

Weaknesses: She has a tendency to be very lazy, when given the option of the easy way and the proper way she will pick the easy way every time without hesitation, getting her into trouble often, because the easy way always has consequences she doesn't bother to think about until they're upon her. She also hates reading.

Note 1: This is a profile for Alex but it also details the general abilities a wizard should have by the end of the series. These feats mainly occurred in the first two seasons while they were learning magic so these abilities should be applicable to EoS wizards like Justin, Professor Crumbs, and other (competent) family wizards.

Note 2: Alex is noted to be the strongest wizard of her generation by the end of the series.