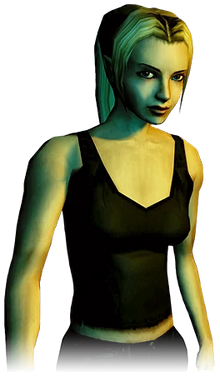 Alex's journey begins when she receives a call from the Rhode Island Police Department regarding the violent murder of her grandfather, Edward Roivas, which happened under suspicious circumstances. She journeys to her grandfather's mansion looking for answers, when the police give her none, she takes it upon herself to find out the truth. She explores the mansion, discovering her grandfather's secret study, and within, finds the Tome of Eternal Darkness, a book that records the fate of those who wields it.

She reads through numerous stories within, and in doing so, she discovers what happened to her grandfather and much more. For within were the tales of nearly a dozen ordinary people throughout the millennia being chosen to be the ones to stop the forces of evil from beyond the Veil, The Ancients.

All climatically leading up to Alex picking up the mantle herself to stop the upcoming danger regarding the Ancients' plan, which is to be set free from the Keeper's seal and breach the Veil of Reality, which is all orchestrated by their servant, Pious Augustus, in their attempt to rule over the entire universe, creating Eternal Darkness.

Powers and Abilities: Possesses all the abilities/spells, resistances, and weaknesses of Magick

Attack Potency: Human level to Wall level physically (Can fight off numerous zombies with her weapons and physical strength). Building level with Enchantments (Fought and defeated Pious Augustus in every timeline, including one in which he possessed the power level buildings with a touch)

Speed: Average Human with Subsonic reactions (Is capable of reacting to Bonethiefs, who can dodge gunfire at point blank range)

Striking Strength: Human Class to Wall Class physically. Building Class with Enchantments (Struck down Pious Augustus with the Enchanted Gladius in every timeline, including one in which he possessed the power level buildings with a touch)

Durability: Human level to Wall level physically. Building level with enchantments (Can take blows from Pious Augustus, who was stated to be able to level buildings with a mere touch)

Stamina: Average normally, Limitless via Magick Pool (As long as Alex has magick to fuel the spell, she possesses "the limitless power of the Ancients", and is incapable of growing tired as her stamina, health, and sanity continuously regenerate)

Standard Equipment: Tome of Eternal Darkness (Including all Runes, Codexes, and Rings of Power), Enchanted Gladius, Smith and Wesson 37 Revolver, and Winchester 1300 Shotgun

Intelligence: Above Average (Was capable of solving the mystery behind her grandfather's demise, and was capable of using an entire city as a giant spell tome against Pious Augustus to fight back his Ancient lord)

Weaknesses: Without the Tome of Eternal Darkness, she is unable to cast any magick. Spells that require a greater Circle of Power, take longer to cast. Cannot negate magick that is stronger than her own