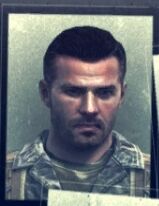 Powers and Abilities: Superhuman Physical Characteristics, Weapon Mastery, Explosion Manipulation via Weapons, Vehicular Mastery, Stealth Mastery (Snuck into an island full of armed men), Preparation, Resistance to Mind Manipulation (Resisted the brainwashing process from Steiner, who remarked that it was extremely rare for someone to possess so much willpower)

Attack Potency: Wall level physically (Can easily chop off a man's head, can easily overpower the enemy, drew blood from Hudson with one punch), Street level to Small Building level with weapons (Most weapons are on this level, the M72 Law is capable of destroying Tanks)

Speed: At least Athletic Human, Subsonic to Supersonic+ with weapons

Lifting Strength: At least Athletic Human, possibly Peak Human (Can throw people of ledges and cliffs with one arm, can boost Woods up to a high place, very fit soldier)

Durability: Wall level (Tanked a chair being slammed against him, survived a car crash, can survive a M82 Barrett 50 cal shot to his leg, survived a helicopter crash, comparable to Woods who survived a grenade belt)

Intelligence: Above Average, possibly Gifted (Is a very experienced soldier, was able to come up with a plan to break out of Vorkuta, a gulag, with Viktor Reznov)

Weaknesses: The Brainwashing the soviets did to him leaves him vulnerable to the numbers station and has been programmed to kill Steiner, Kravchenko, and Dragovich.

Retrieved from "https://vsbattles.fandom.com/wiki/Alex_Mason?oldid=6600461"
Community content is available under CC-BY-SA unless otherwise noted.