VS Battles Wiki
Register
Don't have an account?
Sign In
Advertisement
in: Tier 8, Tier 8-C, Characters,
and 23 more 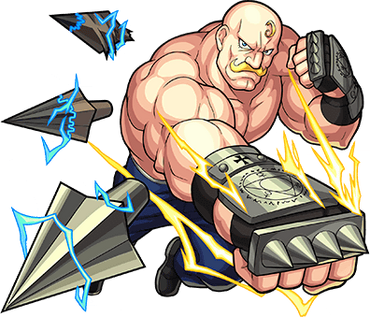 Major Alex Louis Armstrong (アレックス・ルイ・アームストロング, Arekkusu Rui Āmusutorongu), also known as the Strong Arm Alchemist (豪腕の錬金術師, Gōwan no Renkinjutsushi), is a State Alchemist and officer in the Amestrian State Military. The scion of the illustrious Armstrong family, Alex is a remarkably caring commander and friend despite his intimidating appearance, as well as an invaluable skilled ally to Colonel Roy Mustang and Edward Elric.

Powers and Abilities: Superhuman Physical Characteristics, Martial Arts (While appearances might lead some to believe him to be a brute, Armstrong is a very skilled fighter[1], showing incredible agility and swiftness together with his superhuman strength which he combines in a boxing-inspired fighting style augmented by his alchemy), Alchemy and Weapon Creation (Armstrong's unique combat alchemy works by transmuting anything, such as debris, into weapons with a punch[1], that propels them against the enemy), Stealth Mastery (Is trained in tracking people, passing unnoticed despite his size)

Attack Potency: Building level physically (Broke Ed's automail with a single punch[2]. Can hurt Scar[1], who remarked on his incredible strength, and Sloth[3]), higher with alchemy (Impaled Sloth[3], who's physically stronger than him, with alchemy)

Lifting Strength: Class K (Stopped a tackle from Sloth, though the impact dislocated his shoulder)

Striking Strength: Building Class (Can knock Sloth's teeth out with a punch)

Stamina: Superhuman. Could endure a brutal beatdown from Sloth even with a dislocated shoulder[3][4], and fight at full effectiveness the second it was popped back in by an attack.

Intelligence: Gifted. Despite his goofy behavior, Alex Armstrong is one of the best alchemists in Amestris, as he has passed the rigorous exams for becoming a State Alchemist, which would require great knowledge of chemistry and physics. Not only is he a great fighter, but a clever one, as shown when he tricked Scar into placing himself into a position where he could be sniped by Hawkeye[1]. He does however appear to be slightly lacking in common sense when it comes to social interactions.

Weaknesses: Is a poor liar[5]