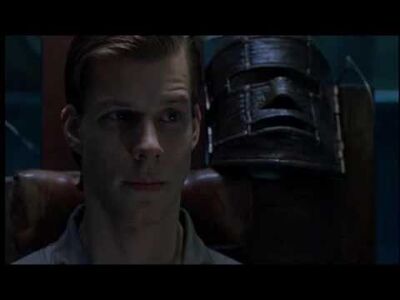 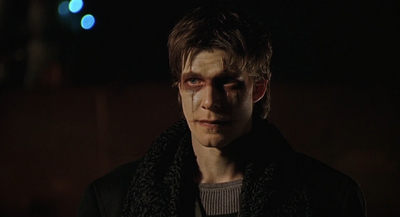 Alex Corvis is the protagonist of the 2000 film, The Crow: Salvation, the second sequel to the original 1994 film. Alex is portrayed by Eric Mabius.

Durability: At least Human level | Likely Unknown (Tanked a room full of gunfire, survived this huge explosion and was just fine afterward, cannot be harmed by conventional means), his immortality makes him hard to kill

Stamina: At least average | Unknown; his supernatural endurance allows him to overcome any adversary, even those that are otherwise untouchable

Intelligence: Gifted; he's proficient with handguns and driving and knows some variety of martial arts, capable of beating the district attorney in chess and take out the corrupt police force one by one

Standard Tactics: Unknown | Alex is bloodlusted towards his targets.

Weaknesses: Normal human weaknesses | He loses his power if the crow is harmed or killed. In addition, he loses his invincibility when he considers his mission completed (can be remedied by his guide Crow making him realize his mistake and rise again).

Alex feels no pain and heals wounds within seconds, so long as they are caused in his search for vengeance. Injuries taken when he diverts from this path do not automatically heal. He can see though the eyes of his guide, the crow. He has psychometric abilities, allowing him to feel pain and other sensations from past experience by the slightest touch of an object. He also demonstrates the ability to fly or merge with the Crow to take flight in some cases.

He appears to be faster and more agile than normal humans, and knows some variety of martial arts.

- Corvis is the only protagonist whose crow appearance wasn't make-up; it was actually scar tissue caused by the helmet on the electric chair.

Retrieved from "https://vsbattles.fandom.com/wiki/Alex_Corvis?oldid=6950219"
Community content is available under CC-BY-SA unless otherwise noted.