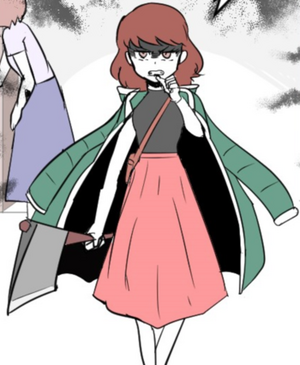 Alex is the female protagonist of the webtoon Boyfriend of the Dead. She is a female survivor that started dating N, a zombie that befriended her to eat her later on, to get more followers. Together they went through a lot and started to fall in love.

Origin: Boyfriend of the Dead

Powers and Abilities: Peak Human Characteristics, Superhuman Speed, Weapon Mastery (Really skilled with a golf club, a baseball bat, and an axe. Threw an axe right in the center of two people who were pretty close. She was aiming to hit a zombie who was going to attack them in the back. Again threw her axe on a power cord that was decently far away), Social Influencing (Made zombies become friendly towards her and even had them help because of her relationship with N. She has also shown multiple times to be able to intimidate both humans and zombies alike)

Attack Potency: Street level (Tore apart a leg and an arm from a zombie)

Speed: Average Human travel speed, with likely Superhuman combat speed (Swung her bat fast enough to knock out 3 people before they could react)

Durability: Street level (Should logically be able to withstand her own attacks)

Stamina: Average (has shown no sign to be underneath a normal human's stamina)

Range: Standard melee range normally, standard to some meters with equipment (By throwing her axe)

Intelligence: Average (She can come up with a pretty good strategy such as when she used a selfie stick as a ranged weapon or when she used her relationship with N to get several zombies to help her get him back.)

Weaknesses: Normal human weaknesses. Clothes are often on her mind, and she can be quite emotional at times.

Retrieved from "https://vsbattles.fandom.com/wiki/Alex_(Boyfriend_of_the_Dead)?oldid=6962653"
Community content is available under CC-BY-SA unless otherwise noted.