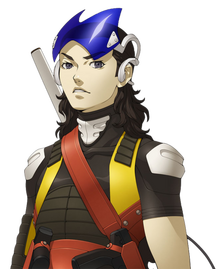 Aleph is the Main Protagonist of Shin Megami Tensei II, being, like all others in the series, a silent character whose personality is shaped and defined by the choices and actions of the Player throughout the game.

Initially presented as an amnesiac gladiator trained by a failed gym, Aleph was eventually revealed to supposedly be the Messiah sent by God to lead Humanity to salvation. However, much later it is revealed that Aleph is actually an artificial Human, genetically created and engineered by the Three Cardinal Archangels, Michael, Raphael and Uriel, who were abandoned by God as a result of their hopelessly corrupt government of the city of Tokyo Millenium that made Earth unfit for the coming of the true Messiah, and who, tired of waiting for the coming of the true Messiah that would never come to be, created their own savior who would mindlessly follow their orders and supposedly lead mankind to salvation, and act as a pawn in their plans to hook up all Humans in a virtual reality which would mimic the ideal of the Thousand-Year Kingdom preached by the Messians

After the defeat of the Three Insane Archangels, Aleph is capable of choosing either to ally with Lucifer and the forces of Chaos, ushering a world of complete anarchy and Chaos where all of Humanity is free from God's grasp or ally with the forces of Law, where he bears witness to the complete extermination of all Humanity and Demonkind by the orders of God. But regardless of the path he chooses to take, Aleph will eventually be forced to engage in a final battle against The One True God Himself: YHVH, who will be briefly defeated, but not before cursing Aleph to an eternal cycle of Death and Rebirth, where he will be tortured for all eternity, being forced to witness the end of the world while being completely powerless to do anything to affect the outcome

Age: Unknown. Though physically very young, as he was genetically engineered and forcibly aged in laboratories

Attack Potency: At least Multi-Continent level (Defeated King Frost, and later did battle with stronger opponents such as Betelguease and Daleth, the latter whom he easily defeated multiple times) | At least Universe level+, possibly Multiverse level+ (Killed Raphael and Uriel simultaneously, and fought with Michael immediately after their defeat, before destroying the fake projection of YHVH created by the combined power and faith of the Three Archangels. Defeated Dainichi Nyourai, who simultaneously embodies and is the very pillar which sustains the Universe itself, and Beelzebub, who is far stronger than both The Cardinal Archangels and Asura and is said to be "chief among those who fell from Heaven") | At least Multiverse level+, possibly Low Complex Multiverse level (Defeated the Names of YHVH, Shaddai, Elohim and Sabaoth, in rapid succession, and gravely wounded Lucifer in his Demonic Form to the point where he died moments after their fight. Was feared by Lucifer himself, who was confused by Aleph's unnatural strength to the point he considered the possibility that he was the incarnation of Satan. Destroyed the one-headed form of the Kuzuryu) | Low Complex Multiverse level (Defeated Satan, who considered Aleph the most powerful Human that had ever opposed God and his forces. Slew a single one of YHVH's infinite heads, although it was a temporary defeat from which He quickly returned from, before cursing Aleph to an eternal cycle of Death and Reincarnation for all eternity)

Intelligence: Incredibly High. Despite being a silent character with no defined personality, Aleph was considered a prodigy by Okamoto, who stated he proceeded through the training simulation completely unscathed, and that he could skillfully fight with Demons even while amnesiac and on a "drunken stupor". Capable of wielding a vast assortment of weapons, ranging from guns to swords, axes, spears and far more, and is very good at negotiating with Demons in general, having to resort to trickery, or simply persuade them to join his side many times in his journey

Retrieved from "https://vsbattles.fandom.com/wiki/Aleph?oldid=6957952"
Community content is available under CC-BY-SA unless otherwise noted.