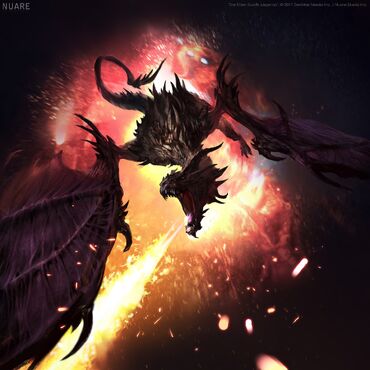 Alduin (Meaning Destroyer-Devour-Master in Dovahzul) is the oldest and mightiest of the Dragons, and the Nordic Aspect of the Dragon God of Time, Aka. He is known as the World-Eater, for his role in devouring the old world so that the new world can be born. However, Alduin doesn't literally eat the world, but rather consumes Time itself, destroying the current iteration of reality and bringing about the beginning of the next in process which is known as the Kalpic Cycle. In Nordic legend and folktale, Alduin is seen as both the wellspring of the world and the harbinger of the apocalypse and is believed to be the greatest enemy of Shor, having battled with him at the beginning of time and bringing his death.

Though Alduin followed his set duty as the World-Eater for innumerable Kalpas without complaint, he would eventually grow bored of his role and forsake it entirely. Filled with immense pride and arrogance, he sought to rule over the world rather than destroy it. He established himself as the God-King of all Dragons, and ruled over mortals in Atmora and later Skyrim during the Merethic Era, with the Priests of the Dragon Cult acting as the intermediary between dragons and men.

Eventually, Alduin's chief lieutenant Paarthurnax became disgusted with his brother's tyranny and led many mortals alongside a few dragons in rebellion against his rule. Together with the Goddess Kyne, he taught humans the Way of the Voice, allowing them to wield the power of the Thu'um in battle. This legendary conflict became known as the Dragon War, and would eventually end when three Nord heroes, Felldir the Old, Hakon One-Eye and Gormlaith Golden, subdued Alduin with the Dragonrend Shout and used an Elder Scroll to cast him adrift in the depths of time. However, their victory wasn't permanent, and Alduin returned millennia later during the Fourth Era alongside with the emergence of the Last Dragonborn, a prophecized hero who mastered the Way of the Voice and slew him once and for all.

Name: Alduin (Also called Ald'uin, Thartaag, Ald Son of Ald). Known by many titles, such as The World-Eater, The Time-Eater, The Epoch-Eater, Firstborn of Akatosh, The Dragon God

Gender: Inapplicable. Referred to as male.

Attack Potency: Universe level+ (Alduin is the World-Eater who brings about the End of Time by completely devouring the current Kalpa, destroying the very laws of reality as defined by the Ehlnofey and resetting Nirn back to the Dawn Era, whose end marks the beginning of a new Kalpa. Said to have destroyed twenty-two Jills with the fire of his breath. Can cause Dragon Breaks with his power. Became even more powerful by gorging on the souls of the dead in Sovngarde. His death was said to have echoed throughout all of Time by Paarthurnax, reverberating across all Eras of the world)

Speed: Immeasurable (Is unbound by the concept of linear time and exists outside of it, living in the spaces between Kalpas. Unaffected by Dragon Breaks. Capable of literally flying through the currents of time, and traveling from Nirn to Sovngarde with sheer speed)

Intelligence: Incredibly High. As the first and most powerful dragon, Alduin is immortal entity unbound by time itself, and who predated the creation of Nirn in the Dawn Era. As a major shard of the Dragon God Aka, and a direct aspect of Time itself, Alduin possesses vast cosmic knowledge over the nature of time and the universe as a whole. Ruled over all dragons until he was overthrown

Weaknesses: Susceptible to the Dragonrend Shout

Alduin destroying the town of Helgen 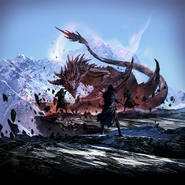 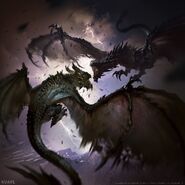 The Worm in Waiting (Stellaris) The Worm's Profile