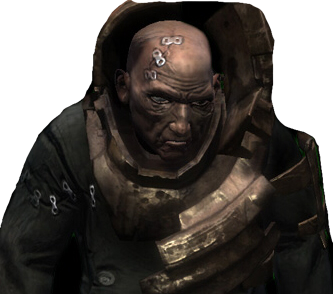 Alden Tate was the leader of the Dust Men, one of the three factions that assumed control in Empire City after the Blast. A powerful mentalist from birth, Alden had incredibly powerful telekinetic abilities. Strong enough to lift a city bus and toss it on top of a building with next to no effort. The lord and master of the poor Warren district of the city, Alden was yet another obstacle in Cole's quest to obtain the Ray Sphere.

Tier: Unknown physically. At least 7-B with powers

Classification: Human Conduit, Heir to the First Sons, Leader of the Dust Men

Superhuman Physical Characteristics, Regeneration (At least Mid-Low, possibly higher), Limited Reactive Evolution (Conduits can gain new power or improve upon current ones by stressing their bodies in different ways. In moments of extreme distress, their bodies will also develop new powers to best aid the situation), Accelerated Development (Training, Battle; Physical Stats, Abilities), Telekinesis, Extrasensory Perception (Could sense Cole MacGrath approaching), Creation and Summoning (Could create and summon hordes of garbage spiders with minds of their own to aid him in combat), Fire Manipulation (Could use his powers to shoot out balls of fire), Flight (with Telekinesis), Forcefield Creation (Can create a shield of yellow psychic energy that could defend against an onslaught from Cole), Rage Power (All Conduits get stronger with rage), Large Size (Type 0 as The Golem)

Resistance to Disease Manipulation/Biological Manipulation (All Conduits are immune to the Ray Field Plague, a highly deadly disease that the CDC was completely unable to deal with)

Attack Potency: Unknown physically (Weak even by Conduit standards. Was easily physically manhandled by Cole after being incapacitated, and was knocked out in one punch by Moya Jones. However, has shown feats of superhuman physique). At least City level with powers (Fought evenly with Cole MacGrath near the end of the game. Stated to be able to destroy Empire City in his rampage)

Speed: Below Average Human movement speed without powers (Walked with a limp and took an extended period of time to get anywhere). Massively Hypersonic+ Reactions and Combat Speed with powers (Could match Cole)

Lifting Strength: Unknown physically, Class 25 with telekinesis (Tore apart a bridge and refashioned it, and his tower, into his massive golem)

Durability: At least Wall level physically (Survived a fall off a bridge that would've killed a normal man). At least City level with telekinetic shields (His shields withstood numerous attacks from Cole)

Intelligence: High (Is skilled at leading the Dust Men army, and was groomed most of his life to lead the First Sons.)

Retrieved from "https://vsbattles.fandom.com/wiki/Alden_Tate?oldid=6464303"
Community content is available under CC-BY-SA unless otherwise noted.