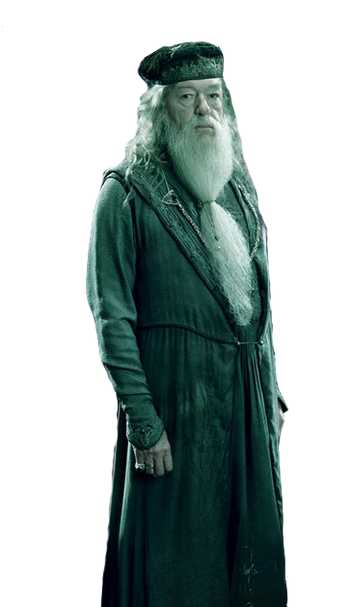 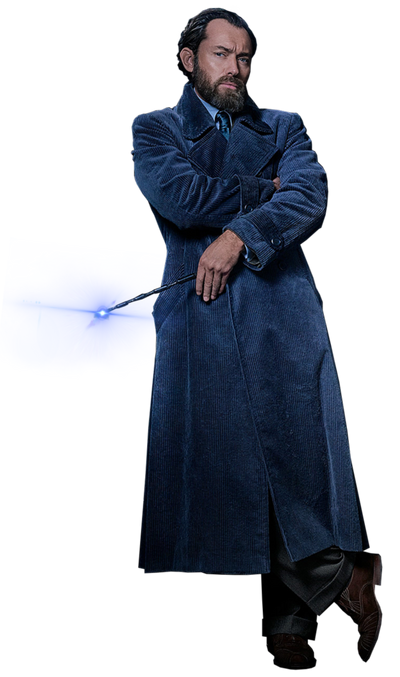 Professor Albus Percival Wulfric Brian Dumbledore, (c. Summer, 1881 – 30 June, 1997) was the Transfiguration Professor, and later Headmaster of Hogwarts School of Witchcraft and Wizardry. He was a half-blood, Muggle-supporting wizard, the son of Percival and Kendra Dumbledore, and the elder brother of Aberforth and Ariana. His father died in Azkaban when Dumbledore was young, while his mother and sister were later accidentally killed. His early losses greatly affected him early on, even at his death, but in turn made him a better person. Albus Dumbledore was considered to be the most powerful wizard of his time. He was most famous for his defeat of Gellert Grindelwald, the discovery of the twelve uses of dragon's blood, and his work on alchemy with Nicolas Flamel.

It was through Dumbledore that resistance to the rise of Lord Voldemort was formed, as it was he who founded and led both the first and second Order of the Phoenix. Due to the fact that he had a keen mind and legendary power, Dumbledore became the only wizard that Voldemort ever feared. He was the wielder and the master of the Elder Wand from 1945 until 1997 and considered by many as the greatest Headmaster to ever grace Hogwarts. As he was about to die by a cursed ring, he planned his own death with Severus Snape. He was killed by Snape during the Battle of the Astronomy Tower.

Though he was no longer alive at the time, it was through Dumbledore's manipulations that Voldemort was ultimately defeated and peace restored to the wizarding world

Classification: Headmaster of Hogwarts School of Witchcraft and Wizardry, Transfiguration Professor, Only wizard that Voldemort ever feared, Defeater of Gellert Grindelwald, Discoverer of the twelve uses of dragon's blood, Grand Sorcerer, Wielder and master of the Elder Wand

Attack Potency: Wall level physically. Large Building level with magic (Comparable to Gellert Grindelwald and fought him in a three-way duel with Aberforth) | Wall level physically. Large Building level with regular spells (Said to be slightly superior to Gellert Grindelwald who created a fire that could potentially burn down Paris), Small Town level+ with more powerful spells (Covered London in a fog. Defeated Grindelwald in a legendary duel despite the latter being in possession of the Elder Wand). Several of his spells ignore conventional durability | At least Athlete level physically (Was able to lift Harry Potter off the ground despite his old age). Large Building level with regular spells (Created a firestorm when he was weakened by Voldemort's potion. Superior to Voldemort who was capable of creating a huge lightning bolt), far higher with more powerful spells (Has been portrayed as somewhat superior to Voldemort and the only one he's ever been afraid of. Should not be overwhelmingly weaker than his younger self). Several of his spells ignore conventional durability

Stamina: High | High (Fought against Grindelwald for three long hours) | Above Average (Fought Voldemort for a while despite his age. Casually swam in water that was "as cold as ice" at the age of 115)

Standard Equipment: Elder Wand (The most powerful wand that has ever existed, able to perform feats of magic that would normally be considered impossible), Deluminator (The Deluminator, also known as the Put-Outer, is a device used by Albus Dumbledore (the first known owner and designer of the one Deluminator known to exist) to remove light sources from the Deluminator's immediate surroundings, as well as bestow them. It looks like a standard silver cigarette lighter), Fawkes (A phoenix and Albus Dumbledore's animal companion and defender)

Intelligence: Genius (One of the most skilled wizards to have ever lived. Capable of devising an elaborate master plan to defeat the seemingly unbeatable Lord Voldemort and was also particularly brilliant at guessing, hypothesizing, and predicting his foes' moves)

Retrieved from "https://vsbattles.fandom.com/wiki/Albus_Dumbledore?oldid=7020795"
Community content is available under CC-BY-SA unless otherwise noted.