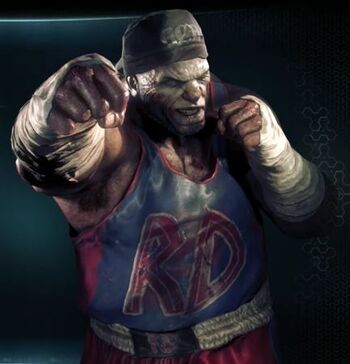 Albert King, aka the Goliath, was a legendary prizefighter with consecutive knockouts since records began. Days before his testimonial fight, King checked into Gotham General for a routine procedure, only to become infected with Joker's mutated blood. After he hospitalized his entire family in a fit of rage, King took on the more violent and sadistic aspects of Joker's personality.

Age: Unknown, likely in his 30s

Attack Potency: Small Building level (Explicitly noted to be inhumanly strong. Fought against Batman and Robin at the same time and was so strong that the two vigilantes couldn't counter his punches. Strong enough to to rip a human's arm off with his bare hands without difficulties)

Lifting Strength: At least Class 5 (Can pick up fallen henchmen and throw them at Batman and Robin. Can rip off limbs with brute force)

Durability: Small Building level (Easily resisted to combined punches from Batman and Robin and wasn't affected by most of the gadgets at the Dynamic Duo's disposal that would otherwise prove effective on normal people. Batman and Robin's standard attacks did no damage to him)