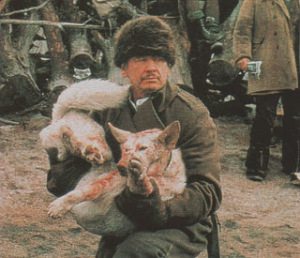 Albert Johnson is an American trapper in Yukon, Canada during 1931 who was a member of a United States Army special intelligence unit during World War 1. He saved a dog from death during an illegal dogfight. This angered the dog's original owner causing him to attack Johnson with his goons. The dogfighter ends up losing a man after said man shoots Johnson's dog. This sparks an all-out war with the dogfighter, the Mounties and Johnson as the latter tries to cross the border into Alaska where he is no longer in Canadian jurisdiction.

Tier: 9-C physically, 9-B with equipment

Powers and Abilities: Expert in Hand-to-Hand Combat (Ex-military), Peak Human Characteristics, Superhuman Durability, Expert Marksman and Trapper, Technological and Information Preparation (Predicted that after the first battle the dogfighter was going to get authorities involved, so he dug trenches into his floor and fortified his cabin for combat) and Stealth Mastery (Excellent trapper that can't be seen unless he wants to be)

Speed: Peak Human (Aimed towards and shot an opponent in the head as soon as they shot his dog, typically reacts faster than his opponents can respond)

Lifting Strength: Above Average Human (Can carry a lot of heavy materials and equipment for a man of his age and still maintain running speed)

Stamina: Very High (Only tires if the altercation lasts a couple of days without sleep, continues anyway)

Range: Standard melee range to hundreds of meters with his weapons

Intelligence: Gifted (Outsmarted a decorated fighter pilot and several enemies and Mounties during his war with them and the dogfighter, excellent fighter and trapper)

Retrieved from "https://vsbattles.fandom.com/wiki/Albert_Johnson?oldid=6638965"
Community content is available under CC-BY-SA unless otherwise noted.