VS Battles Wiki
Register
Don't have an account?
Sign In
Advertisement
in: Tier 7, Tier 7-B, Characters,
and 28 more 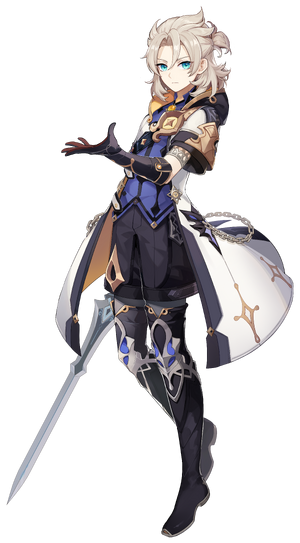 Albedo is the Chief Alchemist of the Knights of Favonius, the Captain of its Investigation Team, and a genius known as the Kreideprinz.

A homunculus created by the mysterious alchemist Rhinedottir and recruited into Mondstadt's Knights of Favonius through the famous Adventurer Alice's recommendation, he spends most of his time performing research and experimentation; having finished his duties as a knight with little effort. He is the primary caretaker of Klee.

Tier: 7-B, possibly far higher with the Art of Khemia.

Age: Unknown, physically in his Late-Teens.

Classification: Homunculus, Kreideprinz, Captain of the Investigation Team, Chief Alchemist of the Knights of Favonius.

Powers and Abilities: Superhuman Physical Characteristics, Genius Intelligence, Creation (can create life and Geo constructs), Expert Swordsman, Magic and Earth Manipulation, Limited Elemental Manipulation (Albedo can create non-Geo elemental entities such as Anemo Crystalflies despite lacking an Anemo Vision), Summoning and Telekinesis (can freely summon and telekinetically move his primary weapon), Transformation, Limited Elemental Intangibility and Limited Flight (can transform into Geo constructs and energy), Teleportation (should be capable of performing the same Geo-based teleportation as Fatui Geochanter Bracers), Forcefield Creation (can create regular elemental forcefields like those used by all Allogenes), Explosion Manipulation (with Transient Blossoms and Fatal Blossoms, which are explosions of Geo energy), Statistics Amplification (with Fatal Reckoning), Damage Boost (with Dust of Purification), Life Manipulation (with the Art of Khemia, Albedo can perform Abiogenesis, creating organic life from inorganic matter, even to the extent of bringing his drawings to life; he can also casually revive and force a dead leyline branch to grow) and Transmutation (with alchemy, Albedo can transform objects into other objects with a touch, and combined with the Art of Khemia, he can do the same to living beings, such as when he turned a butterfly into a bird), Disease Manipulation and Empathic Manipulation (Prolonged exposure to the Smaragdus Jadeite, which contain concentrated elemental energy, can cause effects which vary from illnesses at best to changes in personality at worst[1]), Resistance to Disease Manipulation and Empathic Manipulation (Visions users can resist the effects of Smaragdus Jadeite[1]).

Attack Potency: City level (Albedo assisted in the defeat of the Resurgent Cryo Regisvine, a being resurrected and empowered by the essence of the Black Dragon Durin, making him at least comparable to the Post-Liyue Traveler, whom rivals Tartaglia, who is known as one of the strongest Fatui Harbingers, making him far superior to the likes of Razor), possibly far higher with the Art of Khemia.

Speed: Massively Hypersonic (Can keep up with the Traveler and the Resurgent Cryo Regisvine).

Lifting Strength: At least Peak Human (Should be comparable to the Traveler).

Stamina: Very High, higher with Alchemy. Albedo maintains duties as a high-ranking member of Knights of Favonius while researching every day without breaking a sweat. He spends most of his time climbing and isolating himself in Dragonspine, a region that contains stronger monster varieties and a challenging climate that killed even seasoned Adventurers. Using alchemy, Albedo easily kept pace with Traveler's top speed and maximum effort to traverse a section of Dragonspine.

Intelligence: Extraordinary Genius. Albedo mastered the numerous alchemical forms. He is a genius far above that of Sucrose; a bright young alchemist said to be 20 years ahead of Timaeus, an alchemy instructor recognized by Albedo. Jean also thinks Albedo is a genuine genius. Sucrose further says that Albedo attracts many Teyvat academics to study under him. Albedo is so outstanding that he came to understand life and physic laws from a different world in less than a day of study. Additionally, an alchemical formula that the combined efforts of Sucrose and Timaeus could not decipher was immediately grasped by Albedo. Furthermore, Albedo, followed by Diluc, are the only persons who recognize Alice's pranks in Midsummer Island Adventure.

Alchemy: Alchemy is an ancient art in Teyvat that typically revolves around life and elemental reactions, generally using Mora as a catalyst in combination with specific materials to cause physical transformation. Alchemists go a step further, gathering, storing, and controlling pure elemental energy, such as with Timaeus; creating potions and mechanisms with various effects, such as with Lisa; and even permanently altering the genetic make-up of all forms of life, such as with Sucrose.

Geo Vision: A Vision is a gift from the gods of Teyvat that allows humans to wield elemental powers, turning them into Allogenes. Albedo's Vision is Geo-attributed, thus granting him the ability to freely manipulate all forms of earth and providing him access to as much soil as he needs to create life with the Art of Khemia.