VS Battles Wiki
Register
Don't have an account?
Sign In
Advertisement
in: Characters, Hazbin Hotel, Cartoon Characters,
and 40 more 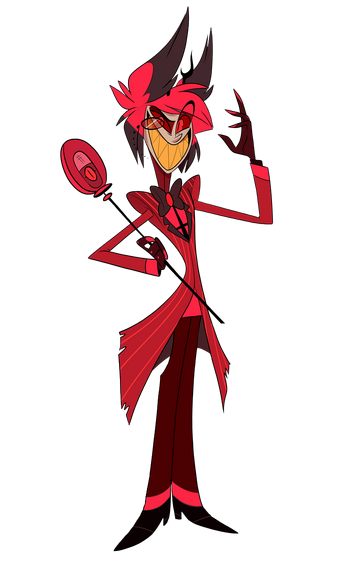 Alastor is one of the main characters in Hazbin Hotel. Formerly, he was a radio host and serial killer from New Orleans, Louisiana before manifesting in Hell as a result of a dog-related incident. Following his death and arriving in Hell, he toppled over demons who have ruled over Hell for centuries overnight, boasting power never seen before in a mortal soul, becoming an Overlord by technicality. During this period, he broadcasted his carnage through a radio for the populace to witness, earning him the title of The Radio Demon.

Powers and Abilities: Superhuman Physical Characteristics, Martial Arts (See here), Weapon Mastery (Of his cane), Immortality (Types 1, 2, 3, 5 and 7; Sinners have already experienced death and thus cannot be killed in the traditional sense, again, making them effectively undead. Demons are eternally youthful and "extra resilient", which allows them to survive being beaten, crushed, and shot, with only an angel's weapon being capable of truly killing them, resulting in their souls ceasing to exist), Regeneration (At least Low-Mid, possibly Mid; Demons have the ability to regenerate lost limbs, and can likely regenerate to a normal form after being flattened, as implied by the survival of the demon who was crushed), Magic (Can perform deals, even between souls, in order to grow more powerful. His powers are inspired by voodoo and eldritch magic, and is heavily implied to utilize voodoo magic), Reality Warping (Altered the clothes of the Happy Hotel staff, changed the scenery of the hotel into that of a funky ballroom during his musical number. Created a bottle of booze by waving his hand. Changed the hotel's sign from "Happy" to "Hazbin" with a bolt of lightning. Lit a fireplace with a snap), Darkness Manipulation (Summoned a group of shadows and can disperse said shadows on a whim), Broadway Force, Teleportation (Brought Husk from a casino from an unknown distance to the Happy Hotel and manifested Niffty from a fireplace. Can summon his cane), Limited Light Manipulation (His cane produces a bright light), Fire Manipulation, Portal Creation (Opened a portal and summoned a swarm of tentacles), Aura (Is shown with an aura of perception-altering demonic glyphs), Transformation (Demons can transform into a "full demon" form during a fit of extreme rage or otherwise intense emotions; His antlers grow, his teeth become long and sharp, and his proportions increase, including the size of his limbs and he gains claws), Shapeshifting (Can turn into other creatures, including animals. Lacks a single form and can take on several appearances), Natural Weaponry (Horns, teeth, claws; As a "full demon"), Sound Manipulation (Layers his voice with a radio effect. Can cycle between different audios on a whim, akin to a radio), Teleportation, Shockwave Generation (Generated a burst of green light which pushed back Charlie, Vaggie, and Angel Dust), Social Influencing (His presence strikes fear in those around him), Death Manipulation (Caused a rose to wilt away), Clairvoyance (Perceived Husk from an unknown distance), Breaking the Fourth Wall (Addressed the audience and told them to "Stay tuned"), Unconventional Resistance to Disease Manipulation and Poison Manipulation (Demons can be affected by poisons, venoms, drugs, etc., and still feel the effects, albeit mitigated, and they can contract diseases and illnesses, on top of having to endure extreme, breath-hindering heat, which only serves to make them more miserable), much more (Sinners typically take on the appearances and traits of animals, with Alastor taking after deer. Keeps his abilities a secret as to remain unpredictable)

Attack Potency: At least Small Town level, possibly higher (Destroyed Sir Pentious' airship with little effort. Possesses an unimaginable level of power no mortal soul had attained up until that point, rivalling Hell's most destructive evils, which enabled him to overthrow Overlords who have ruled for centuries seemingly overnight. As an Overlord, being one of the most powerful beings in Hell, he stands far above the other mortal souls in Hell's social hierarchy and is not a force to be trifled with. Does not fear Lucifer, and instead shares a mutual respect with him, despite the former's overwhelming power. Is one of the few demons capable of using magic, as his power far exceeds that of average demons. Is considered "all-powerful" by his character bio)

Speed: At least Hypersonic+ (Is one of the most powerful beings in Hell, possessing raw power that far exceeds that of other demons and rivals the most destructive evils of Hell, and is debatably in the same league as Stolas, meaning he is far superior to Blitzo and his crew, who are consistently portrayed as bullet-timers, and by extension, Robo Fizzo who maneuvered around Blitzo's rifle with ease)

Lifting Strength: At least Class 25 physically (Dismembered a demon in a brutal fashion, which would at minimum require this level of strength. Should be comparable to Sir Pentious, who is considered a wimp in terms of physicals), at least Class 100 with tentacles (Restrained and crushed Sir Pentious' airship to the point of exploding with little effort)

Striking Strength: At least Small Town Class, possibly higher (Is considered to be a better fighter than Sir Pentious and could defeat him in one strike)

Range: Standard melee range, Extended melee range with his cane, at least Hundreds of meters with magic (Warped the entire first floor of the Happy Hotel)

Intelligence: High. Alastor is cunning, deceitful, and manipulative, having been a serial killer during his time alive, retaining a state of unpredictability by feigning weakness and neglecting to use his powers, playing into his target's weaknesses, as seen when he antagonized Sir Pentious and sent him into a blind rage, and maintaining a charming and pleasant exterior in order to mask his malicious and tyrannical nature, opening up those around him to a false sense of security, all for his entertainment. Either through sheer strength, intelligence, or a combination of the two, he overthrew centuries-old Overlords and rose to great infamy throughout Hell all in one night, a testament to his ability.

Weaknesses: Alastor is not the kind of killer that follows or chases people since he has a strange ethical code against it. Demons can be truly killed by an angel's weapon, resulting in their souls ceasing to exist.