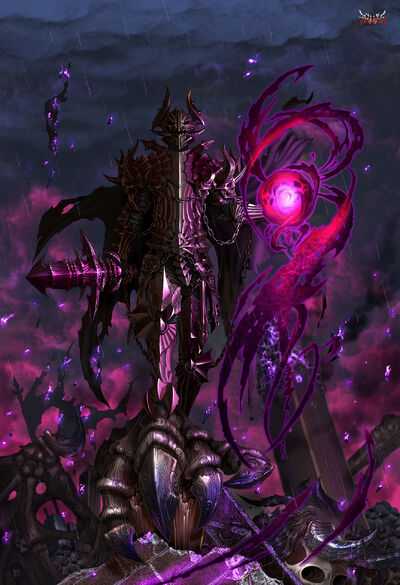 Superhuman Physical Characteristics, Supernatural Luck (Beings of elevated Natura+ can have more than one Open Roll. Has an 1% to pass any resistance check regardless of difficulty), Fate Manipulation (Beings of elevated Natura+ are capable to limited manipulate the events that happens around them, including Statistics Amplification, resist and negate any status effect, and avoid commiting mistakes. This ability can be used 3 times), Superhuman Physical Characteristics, Social Influencing (Possesses secundary's values of: Style 55, Intimidation 210, Leadership 225 and Persuasion 150), Enhanced Senses, Swordmanship, Ki Manipulation including Aura and Non-Physical Interaction, Command Inducement (Can manipulate his underlings, even being capable to increase their stats. Can control minor demonic beings), Negation (Negates the resistances and damage reduction abilities of those with lower Gnosis, as well as bypass their invulnerability), Statistics Amplification (To him and his underlings), Explosion Manipulation (Can make his underlings explode), Extrasensory Perception (Can see supernatural beings and magic. Can see and harm Noth, beings who lack even a concept in the structure of reality), Absorption of demonic powers (Constantly regenerate ki and zeon from the environment)

Speed: Average Human to Peak Human (7.33 m/s to 10 m/s without armor) with at most Massively Hypersonic+ reflexes (Comparable to the Arias Vayu)

Lifting Strength: At least Class 1, likely higher. Class T with preparation (Possesses 180 in Feat of Strength, capable to increase his STRength in +2, making him comparale to a base Behemoth, possibly higher)

Standard Equipment: Saytan, a two-handed sword. Arbiter armor, whose have the capability to alter his voice and protect him against supernatural and psychic abilities that would uncover his real identity

Intelligence: Very high, Possesses an INT of 7 (Between sharped and nearly genius) with the following secundaries: Tactic 210 (Mastery) and Occultism 85

Retrieved from "https://vsbattles.fandom.com/wiki/Alastor?oldid=7009740"
Community content is available under CC-BY-SA unless otherwise noted.