VS Battles Wiki
Register
Don't have an account?
Sign In
Advertisement
in: TV Characters, Vampires, The Vampire Diaries,
and 19 more 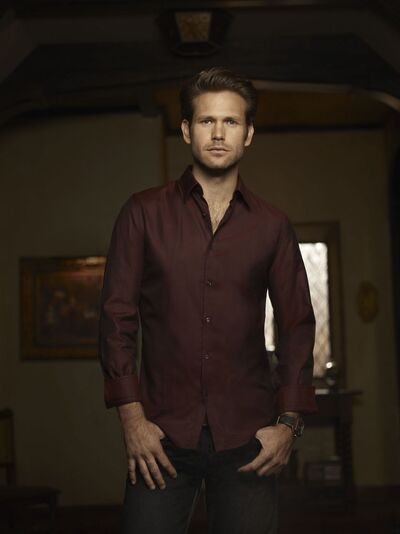 Alaric J. Saltzman is a main character of the supernatural dram TV shows, The Vampire Diaries and Legacies. He was formerly only a recurring character for the first half of Season One, Season Four and Season Five. He later served as the main antagonist in Season Three along with the Mikaelson Family. Alaric was a human before being turned into an Enhanced Original Vampire by Esther Mikaelson in order to kill the Original family. He originally came to Mystic Falls to find and kill the vampire who murdered his wife, until he learned that she voluntarily became a vampire and left him. He also learned that his wife had a child when she was a teenager, a daughter named Elena Gilbert. After his romantic relationship with her adoptive aunt, Jenna ended in her tragic death, he stepped in as a sort of surrogate father to Elena and her brother, Jeremy. He also has a best friend relationship with their friends along with a brother like relationship with Damon. He would later go on to become the headmaster of a school for the supernatural with his wife Caroline Forbes.

Powers and Abilities: Superhuman Physical Characteristics, Immortality (Types 1, 3, and 8), Regeneration (High-Mid, superior healing to Original Vampires), Mind Compulsion (Can control an individual into doing their bidding after making eye contact, Limited Empathy Manipulation (Can compel an individual into ignoring or turning off their emotions by "compulsion"), Illusion Creation, Empathic Manipulation (A vampire can shut off their own emotions effectively becoming an being without humanity, though a very powerful emotional shock can turn them back on), Telepathy (Can get inside the minds of individuals and look for information through physical contact, he along with Stefan Salvatore are the only two vampires that are able to do this from a distance), Dream Manipulation (A vampire can both produce and modify dreams, create nightmares and lucid dreaming, as well as distort an individual's perception of reality effectively trapping someone in their dream), Resurrection (Alaric is able to resureect himself with the Gilbert ring so long as he dies of supernatural means, Can resurrect so long as Elena Gilbert is alive as his life is linked to hers, Any vampire can resurrect themselves if they were to drown or die due to oxygen deprivation, but they will die all over again if the reason they died in the first place isn't changed to something more favorable, effectively creating an endless cycle of life and death), Has a high pain tolerance, Martial Arts, Weapon Mastery, Accelerated Development (Passive. Enhanced Original Vampires grow stronger with age), Corruption (Vampires are able to turn humans into vampires with their blood), Enhanced Senses, Resistance to Mind Manipulation (Vampires have been shown to have limited resistance to other vampire's compulsion and require them to be severely weakened in order for them to be manipulated)

Attack Potency: Small Building level (Superior to Original Vampires, Was able to effortlessly defeat Damon, Stefan, & Rebekah at the same time, Was able to easily defeat and manhandle Klaus in a fight)

Standard Equipment: Wooden Stakes, Wooden Stake Launcher, Arm Cuff Stake (A hidden device under Alaric's sleeve that allows him to either draw the stake from under his shirt sleeve with a flick of the wrist or when punching an opponent with enough force it is launch it forward, White Oak Stake, Vervain Darts, Vervain Grenades, Wolfsbane Grenades, Gilbert Ring (A ring Alaric always wears that his wife Isobel had given to him. It allows him to be resurrected after being killed by a supernatural creature or by any supernatural means, though it had the negative effect of making him more bloodlusted.)

Intelligence: Gifted (Was the history teacher at Mystic Falls High School and wold later become the headmaster of a school, Is a gifted and experienced vampire hunter allowing him to fight vampires and enemies stronger than him despite being a human at the time)

Weaknesses: Standard Enhanced Original Vampire weaknesses (Unlike normal vampires and even Original vampires, Alaric is immune to wooden weapons and the effects of the White Oak Stake), Invitation, Sunlight (While affected by sunlight similar to other kinds of vampires, an Enhanced Original Vampire only suffers minor burns), Decapitation, Heart Extraction, Link to Elena Gilbert (Part of Alaric's immortality is to resurrect so long as Elena Gilbert remains alive, though the limits to this weakness is unknown as at the time of his creation Elena was biologically dead (a vampire) & after being resurrected he may have become "truly immortal")