VS Battles Wiki
Register
Don't have an account?
Sign In
Advertisement
in: Tier 6, Tier High 6-A, Characters,
and 17 more 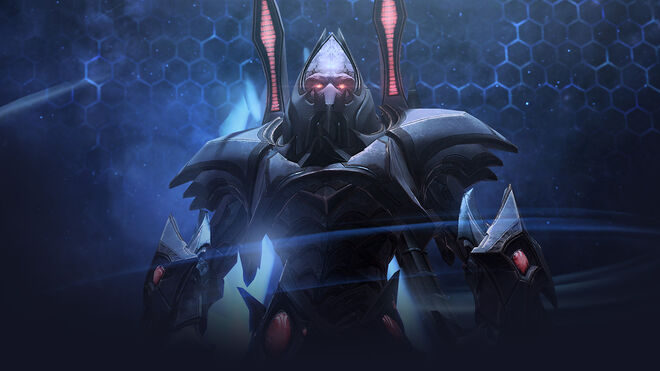 Alarak is a Protoss warrior and Highlord of the malevolent Tal'darim. He is a brutally cunning warrior, willing to sacrifice any and all for the sake of victory. His people are, by nature, warlike, and offer a way for even the most humble being to become something greater... if they prove strong enough to survive. Rak'Shir is a ritual rite of ascension that takes place when two Tal'darim enter a duel to the death, with the winner climbing higher in the ranks; this is how Alarak became Highlord. Alarak was able to effortlessly cut down enemy after enemy before allying with the Heirarch of the Templar, Artanis, and finally slaying Highlord Mal'lash and taking his place.

He views strength as everything, caring little for those he deems weak or cowardly. He revels in slaughter and is not opposed to even some of his own troops being slain in a battle if the outcome ends in more bloodshed. After being betrayed by Amon shortly before becoming Highlord, he dedicated his life (and thus the lives of his whole people) to taking revenge on the dark being. After aiding in the destruction of the dark being at the hands of Sarah Kerrigan, Alarak began setting his sights on expanding his empire and power.

Though many things could be said of Alarak, him being a weak character in the verse in not one of them. Alarak displays some of the most devastating power in the series, matching, if not surpassing, the power of Artanis. He is equipped with two powerful psi-blades and a heavy suit of armor capable of generating force fields and amplifying his already immense strength. Whether blasting down bases single-handedly or chasing after a god, Alarak is not one to back down from any task set before him.

Age: Unknown, at least 270 years old at the end of StarCraft II: Legacy of the Void

Attack Potency: Multi-Continent level (Should be as strong as, if not stronger than, LotV Artanis), Psionic blades cut through any unshielded material, regardless of density or strength

Speed: At least Superhuman (Able to outpace and react to Zerglings and other Zerg units), likely Subsonic with Deadly Charge (Can blitz even trained warriors before reaction)

Lifting Strength: Class 10 (Should be physically on par with/above Artanis)

Durability: Multi-Continent level (Should be able to fight and take blows from LotV Hybrid Reavers)

Stamina: Very High (Able to fight an intense battle with Mal'lash, who is close to him in power, for an extended period of time with no sign of tiring)

Range: Extended melee range. At least Several Hundred Meters with psionic attacks (Able to fire an attack that broke through a heavily fortified barrier and proceeded to destroy a structure a minimum of several hundred meters away)

Intelligence: Gifted (Organized events that caused massive deaths of those who opposed him in order to speed up his ascension; effectively leads his people with little regard.)