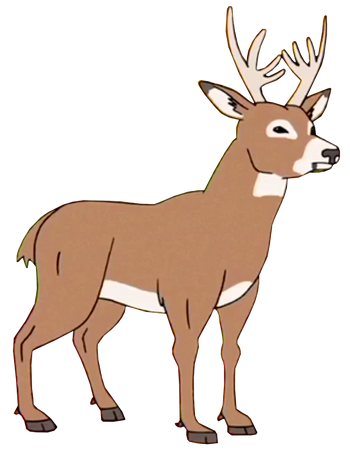 Alan Dracula is powerful deer found by M.T. in The Family Tree Car and helped hide her from the Reflection Police. After becoming friends with M.T. and Jesse he joined them in their journey of getting off the train.

Tier: At least 9-C physically, 9-B with his Laser Eyes

Powers and Abilities: Immortality (Type 2, Can split his body in half and detach his head), Regeneration (Low-High, Regenerated from a puddle of liquid), Shapeshifting/Body Control/Size Manipulation/Elasticity (Can stretch, change the shape and size of his body into anything, turn different colours and turn into various objects, separate his body, etc), Invisibility (He can completely blend with the environment making him invisible), Surface Scaling, Energy Projection (Can shoot laser beams out of his eyes, that vaporized vines and caused one of the Reflection Police agents to blow up), Fire Manipulation (Set himself on fire), Electricity Manipulation (Turned his body into electricity), Ice Manipulation (Froze Jesse's legs by sneezing), Heat Manipulation (Increased his body heat to harden the mud covering him), Self-Destruction (Can turn himself into a bomb), Teleportation and Flight (He can fly by creating rocket boosts from his legs)

Resistance to: Electricity Manipulation (Was nonchalantly chewing on a map that electrocutes people)

Attack Potency: At least Street level physically (At least as powerful as real life deer), Wall level with his Laser Eyes (Cause an agent of the Reflection Police to blow up)

Speed: Superhuman (Should be comparable to deer in real life)

Lifting Strength: Superhuman (Was casually carrying Jesse and Lake, who is completely made of metal, while climbing a giant tree)

Stamina: High (Was able to run while supporting two human made out of metal)

Range: Standard Melee Range. Dozens of metres with his powers

Weaknesses: He is unable to leave the train

Retrieved from "https://vsbattles.fandom.com/wiki/Alan_Dracula?oldid=6014139"
Community content is available under CC-BY-SA unless otherwise noted.