VS Battles Wiki
Register
Don't have an account?
Sign In
Advertisement
in: Tier 6, Tier Low 6-B, Tier 6-B,
and 44 more 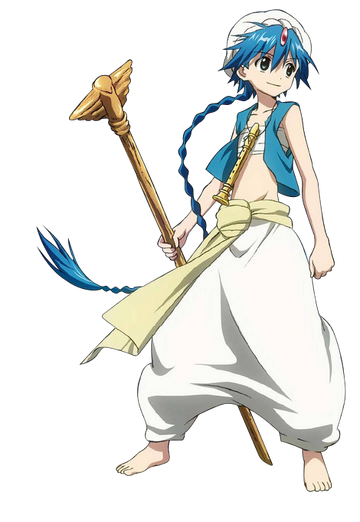 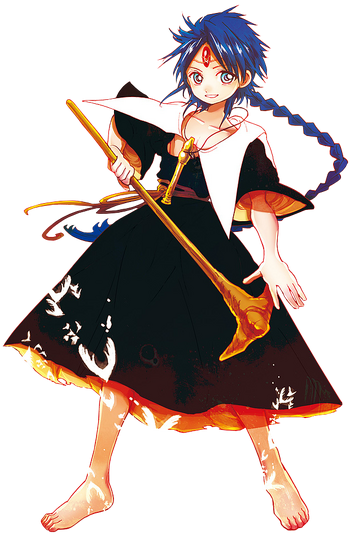 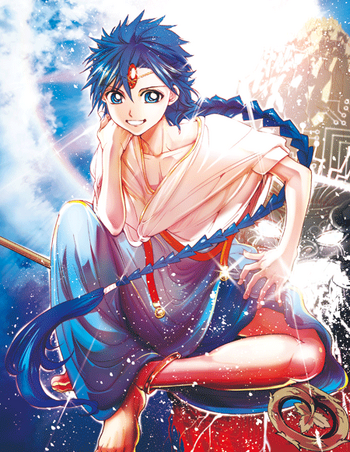 Aladdin (アラジン, Arajin) is one of the two main protagonists of the Magi series together with Alibaba Saluja. He is one of the four Magi in the current era and a Magician. He is the son of King Solomon and Queen Sheba of Alma Torran, and is commonly referred to as Solomon's proxy. Aladdin was raised by Ugo in the Sacred Place and sent to this world to fight Al-Thamen and to prevent a repeat of the tragic incident that destroyed Alma Torran. During the three years when Alibaba's consciousness was drifting in the new dimension, Aladdin and Morgiana mysteriously vanished. Later on, it is revealed that he had a confrontation with Arba and Sinbad two years ago, and the reason why they secluded themselves to the world is to avoid being found by Sinbad.

Superhuman Physical Characteristics, Extrasensory Perception (All magic can see rukh which exists in a dimension which normal people can't see), Power Nullification via Absorption (Magi can absorb rukh from outside sources, even people. if a person has their rukh stolen they lack the ability to produce magoi and use magic), Soul Absorption (The rukh is the soul and having all of one's rukh absorbed will kill them. Arba, as a magi, could kill Dark Djinns by absorbing their rukh), Flight, Black and White Rukh Manipulation, Magoi Manipulation, Magic, Elemental Manipulation, Gravity Manipulation, Water Manipulation, Heat Manipulation, Absorption (As a Magi Aladdin can absorb the ruhk around him to get more magoi), Wind Manipulation, Earth Manipulation, Light Manipulation, Lightning Manipulation, Sound Manipulation, Mind Manipulation, Illusion Creation, BFR, Summoning (Magi can summon up to 72 Underground Cities containing many treasures and a Djinn of Solomon ruling over each of them, he can summon Djinn and souls from the flow of Rukh), Passive Borg (Borg is a barrier which blocks physical and magical attacks; as a Magi Rukh protects Aladdin without even him being aware of it at times because he is "beloved by Rukh"), Limited Morality Manipulation and Purification (Type 2; Aladdin can use Solomon's Wisdom to speak to ones Rukh. This enables him to read their past and dispel the Dark Rukh created and revert it back to White Rukh), Clairvoyance via Solomon's Wisdom, Information Manipulation (With Solomon's Wisdom Aladdin connects himself to the Sacred Palace which allows him access to all information in the Rukh even from different universes like Alma Torran), Astral Projection (He can project into ones Rukh), Non-Physical Interaction, Vector Manipulation, Physics Manipulation (Aladdin through Solomon Wisdom gained the same ability as his father to manipulate the very fabric of reality but he has not mastered it yet), Law Manipulation, (Magic that rewrites the laws of the world are permanent. Aladdin rewrote the laws of the world so that his spell on Judar has eternal propulsion), Immortality (Type 4, When a Magi dies, their Rukh goes back to the Sacred Palace and then be resurrected once again into the world by Solomon. If a compatible clone of the Magi exist they can be resurrected immediately), Resistance to Magic (As a Magi "beloved by the Ruhk", pure Magoi cannot harm him, dispersing harmlessly around him. His Borg protects him from any interference of ill-intent, including Belial's Memory Manipulation).

All previous abilities in addition to Law Manipulation and Physics Manipulation, (After Aladdin mastered his father's magic he can change the laws governing the physics of his world with just one finger and manipulate the fabric of reality), Vector Manipulation, (Right here but now mastered), Atomic Manipulation (With Alchemic Magic Aladdin is able to reconstruct a object at a Atomic level creating a whole new substance), Sealing (Aladdin perfected both worlds Magics and surpassed his Father in power so Aladdin has this Sealing Magic), Life Manipulation, Teleportation, Soul Manipulation, Transmutation, Telepathy, Martial Arts, Plant Manipulation, Fungus Manipulation, Healing, Space-Time Manipulation, Dimensional Travel (He can travel to the Sacred Palace), Acausality (Type 4), Resistance to Power Nullification (Angels from the sacred palace could reduce everything that's made of rukh to rukh and send it back to the scared palace, this basically means that since there's no rukh there's nothing to produce magoi, but the Angels could not get pass Aladdin's borg or erase it even though it was made out of rukh), Soul Manipulation and Mind Manipulation (Unaffected by Sinbad rewriting the system of Ruhk, which governs the fate and souls of everyone in the world and altered their minds).

Speed: FTL reactions and combat speed (Kept up with Titus, who dodged his beam of light. Comparable to Yamuraiha and can keep up with Alibaba against Hakuryuu and Judar) | FTL (Faster than before. Stronger than Arba and Sinbad)

Durability: At least Multi City-Block level physically (Can resist Morgiana's kick), Country level with borg (Was able to stop an attack from Muu and Medium. Should be comparable to Judar's), | At least Multi City-Block level physically, at least Country level with Borg Al-Samm (It was stated to be so powerful that not even Arba, Sinbad or Solomon can break it)

Range: Can range from several meters to a kilometer | Unknown, Low Complex Multiversal via Solomon's Wisdom

Standard Equipment: His staff and a flute

Intelligence: Pre-Time Skip: Extremely intelligent when it comes to magic. Post-Time Skip: Genius, using Solomon's Wisdom he learnt the entirety of both worlds' magic even mastering and going beyond his father.

Borg: A magical energy shield that blocks physical and magic attacks. This is one of the most basic skills for any mage.

Ugo: Aladdin's djinn. Ugo is a very powerful, fast and durable djinn that can use heat magic.

Fire Magic: Aladdin being adept in the 1st rukh allows him to use fire magic.

Water Magic: Aladdin being adept in the 2nd type of rukh allows him to use water magic.

Wind Magic: Aladdin being adept in the 5th type of rukh allows him to use wind magic.

Light Magic: Aladdin being adept in the 3rd type of rukh allows him to use light magic.

Lightning Magic: Aladdin being adept in the 4th type of rukh allows him to use lightning magic.

Sound Magic: Aladdin being adept in the 6th type of rukh allows him to use sound magic.

Clairvoyance Magic: Aladdin can use this Magic and project his memories from the rukh in his blood as images but he hasn't mastered it yet.

Al-Kimia Al-Quadima A technique that reconstructs objects on a molecular level by replacing their very substance.

The reason why we do not rate Aladdin as Low 1-C is because he only defeated the true form of David which is not the same as David's Low 1-C level proxy in the Sacred Palace. If those explanations are insufficient, we can probably write it off as Plot-Induced Stupidity, as Aladdin has definitely never remotely displayed a multiversal scale of power.