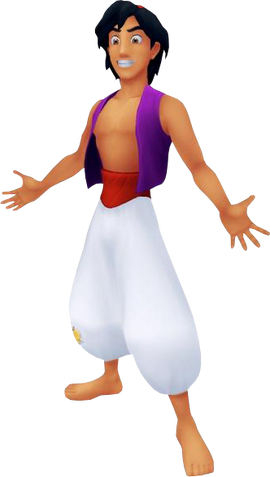 Aladdin is the "street rat" of the Agrabah world, which Sora and other meet by accident there. Wanting to keep Princess Jasmine safe, he joins them on their adventures for a while.

Powers and Abilities: Superhuman Physical Characteristics, Weapon Mastery, Damage Boost (The Critical Boost ability increases Aladdin's chance of landing critical hits), Telekinesis (Can automatically collect nearby prizes and items via Treasure Magnet), Acrobatics, Flight, Can withstand an otherwise fatal combo (Via Once More), Non-Physical Interaction (Can harm Heartless), Resistance to Absorption, Death Manipulation (Unaffected by Heartless, which passively kill and absorb things around them), Data Manipulation (Ansem The Wise stated that the "heart" cannot be contained by data, and that the process itself would be incalculable), Existence Erasure (Can take hits from Heartless, which can do this with any attack)

Attack Potency: At least Large Star level (Can keep up with Sora and others in the fights against Jafar)

Speed: Massively FTL+ (Can keep up with Sora and others)

Intelligence: Average, though a skilled and clever warrior

Retrieved from "https://vsbattles.fandom.com/wiki/Aladdin_(Kingdom_Hearts)?oldid=6962400"
Community content is available under CC-BY-SA unless otherwise noted.