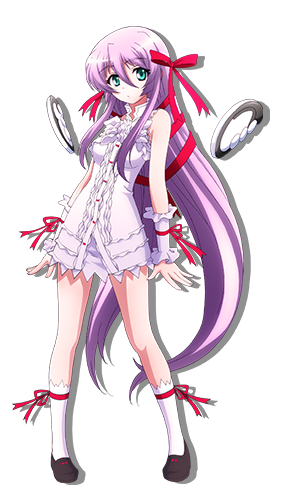 Al Azif (アル・アジフ, Aru・Ajifu) is the spirit of the Necronomicon (ネクロノミコン, Nekuronomikon). Her primary goal is to hunt down and destroy all unholy powers that are in league with the evil gods. Her original Deus Machina was Aeon; however, after losing Aeon, she claimed Demonbane as her new Deus Machina.

Powers and Abilities: Superhuman Physical Characteristics, Flight, Enhanced Senses and Cosmic Awareness (Sorcerers can expand their mind and senses to the point they can feel everything in the universe. Grimoires are capable of the same feat), Information Analysis (Can analyse her target magicks, allowing her to find information about their nature and their weak points),, Can transform into countless of pages, Energy Blasts, Reality Warping (Magick is the fundamental constituent of reality that sorcerers can shape to their will), Information Manipulation (Magick is the act of manipulating information that makes up all existence and make one's own law that disregard reality itself), Law Manipulation (Sorcerers can impose new laws on the world), Telekinesis, fire and ice attacks via Cthugha and Ithaqua, Powerful spiritual, mental and conceptual attacks (Magick attacks can affect one on a mental, spiritual and even conceptual level), Magical barriers (Can block incoming attacks and can even ward off mental and spiritual attacks), Elder Sign can summon Demonbane and create fantasy beings such Night-Gaunt with parts of her pages, magic, Teleportation, Time Travel, Telepathic Communication, Can transfer memory, Resistance to Mental, Spiritual and Conceptual attacks (Capable of resisting other Sorcerer attacks)

Speed: Hypersonic (Should be equal to Kurou who can dodge point blank explosions) | High Hypersonic (Should be capable of fighting against a casual Winfield and Titus, whom while holding back, managed to reach this amount of speed) | Speed of Light (Comparable to Sorcerers in Black Lodge such as Vespasianus whom could fight equally against Sandalphon even while riding the Hunting Horror, which can move at the speed of light)

Durability: Multi-City Block level normally and with barriers (Could tank attacks that managed to destroy multiple city blocks) | Island level normally and with barriers (Capable of tanking Dagon attacks who can bring damage to an entire island and shake it with its mere weight and roars) | Universe level (Equal to Sorcerers in Black Lodge who can fight against and even tank Sandalphon attacks)

Range: Dozens of meters, can reach to hundreds of meters

Intelligence: Genius and supercomputer level, able to perform and analyze magical and Azathoth calculations of Imaginary Expansion Catapult and mastered it in an instant and merged infinite possibilities of all points in the entire universe into one to allow Demonbane to teleport at the desired space, held immeasurable knowledge on magic, cosmic beings and the entire Creation (only until Al is complete), an veteran fighter as she has battled Master Therion through many eons and with other Evils for more than one thousand years

Weaknesses: She is impulsive and childish. She lost most of her pages at early game and unable to use majority of her abilities. Al Azlf rapidly loses energy and can suffer a huge decrease in power if she doesn't have a master to fight with.

Note: This profile only covers Al Azif/Nerconomicon from Zanma Taisei Demonbane. Not to be confused with the Cthulhu Mythos/original counterpart.

Retrieved from "https://vsbattles.fandom.com/wiki/Al_Azif?oldid=6287559"
Community content is available under CC-BY-SA unless otherwise noted.