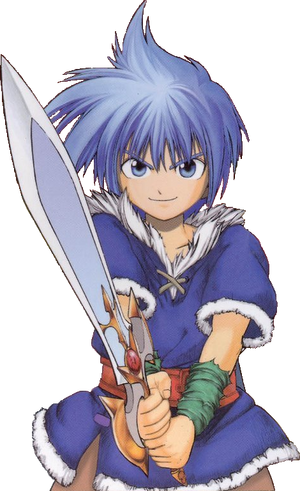 Al, the protagonist of the manga Fire Emblem: Champion's Sword, he was raised in the mountains by his adoptive father, Magough, he leaves for a journey on his 15th birthday, he then meets his companions, Gant and Tiena, along the way, he sets his goal towards finding the Fire Emblem, leading him to his first encounter with Zephiel, who tells Al that he is actually from Bern, he later returns to his home in the mountains and learns that he is the son of Hartmut, one of the heroes of the Scouring, and that he and his mother are dragons who were sealed away by Hartmut over 1000 years ago, he was then unsealed by the Blackbone clan, which desired to use their power for evil.

Classification: Half Arch Dragon, Half Human, Son of Hartmut

Powers and Abilities: Superhuman Physical Characteristics, Sword User, Can ride a wyvern, Can jump extremely high | Can reflect Magic attacks with his sword, Can restore his sword after it's broken, is unable to hear | Same as Base | Same as Incomplete Dragon Lord (Minus the inability to hear), Afterimage Creation | Can fire beams of light, Flight, Regeneration, Non-Physical Interaction (Capable of harming Non-Corporeal beings)

Stamina: Superhuman (Can fight for long periods of time)

Intelligence: Above Average (Used strands of his hair to create a string to grab the keys to his Cell door) | Same | Same | Same | Acts on an instinctual level | Same as his pre-Arch Dragon state 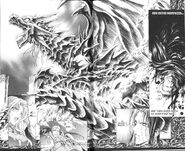 Al powered by the Champion's Sword.
Add a photo to this gallery

Retrieved from "https://vsbattles.fandom.com/wiki/Al_(Fire_Emblem:_Champion%27s_Sword)?oldid=6119280"
Community content is available under CC-BY-SA unless otherwise noted.