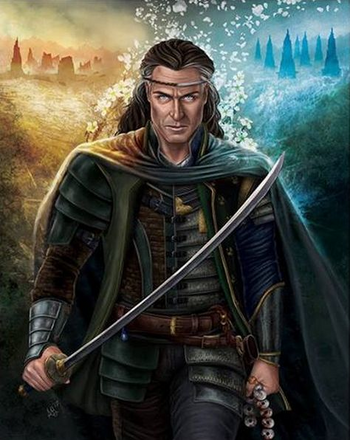 al'Lan Mandragoran, Lord of the Seven Towers, Lord of the Lakes, True Blade of Malkier, Defender of the Wall of First Fires, Bearer of the Sword of the Thousand Lakes, May He Sever the Shadow, Dai Shan, and Aan'allein, is the Uncrowned King of Malkier. He usually goes by Lan. After the Aiel War Lan became Warder to Moiraine Damodred and accompanied her on her quest to find and guide the Dragon Reborn. He fell in love with Nynaeve, and they later married. He served as a commander for the forces of the Light in the Last Battle, where he slew the Forsaken Demandred in one-on-one combat.

Attack Potency: At least Wall level, possibly higher (Succeeded in killing Demandred, whereas Galad and Gawyn failed. Overwhelmed and killed two Myrddraal at once, and kills Trollocs with no difficulty)

Speed: At least Superhuman, possibly higher (Kept up with Demandred better than Galad and Gawyn did. Faster than Myrddraal)

Durability: At least Wall level, possibly higher (Took an attack from Demandred and got back up despite starting the battle wounded. Should be comparable to his own strength)

Stamina: Very high. Can fight for long periods of time thanks to the Warder bond.

Intelligence: Lan is arguably the most skilled swordsman in the world. He has decades of experience, having been taught to fight and command since he could speak. He is an extremely skilled tracker, hunter, and archer as well.

As a Warder, Lan receives various benefits from the Bond. He heals from serious injuries much faster than normal men, and he gains access to the Aes Sedai ability to detect Shadowspawn. His strength and speed are increased compared to his pre-Bond state, and he can go without food, water, or rest for long periods of time and remain at full strength. They also receive protections on their dreams similar to Aes Sedai warding them.

Lan is one of the best users of the Void in the series, able to achieve it instantly. In this state of extreme concentration, the user stops emotion from hindering their actions. They gain the ability to ignore debilitating pain. They also gain an unconscious understanding of the terrain around them, as well as an increased ability to predict their opponent's motions by their steps and eye movements. They can feel the presence of other people coming from other directions, and Lan explicitly experiences a slowed sense of time when entering combat within the void. The void is not explicitly supernatural, but it allows normal humans to access an inhuman state of awareness and perception.

Retrieved from "https://vsbattles.fandom.com/wiki/Al%27Lan_Mandragoran?oldid=5369398"
Community content is available under CC-BY-SA unless otherwise noted.