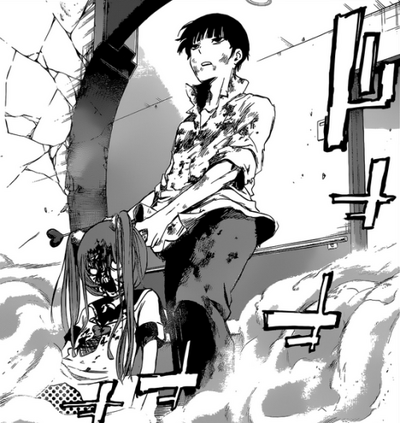 Rintaro Akuta (芥 倫太郎 Akuta Rintarō) is a main character from Magical Girl Apocalypse. He was a police officer before the magical girl attack. His sanity had slipped by the time he meets Kii's group, who sought refuge in the mall where he was apparently working. Although he initially behaved like a complete cretin, attempting to harass the girls, he later proved useful when he killed Parasite M. He was also the first survivor that found out about the origin of the Alternative Magical Girls, and tried to kill Tsukune to prevent the reality where she would create the Alternative Magical Girls and send them back to the past.

When Tsukune was killed by Kii and the reality of alternative magical girls attack disappeared, Akuta was one of the people who retained memories of the disaster and was protected by Anai Miu and ironically Parasite M, aka Hana-chan.

Classification: Human | Human equipped with magical wands | Human with the DNA of Alternative Magical's inside his body

Weaknesses: Normal human weaknesses | Same | The Alternative Magical Girl particles cause a strain on his body the more he uses them. May potentially lead to his death

Key: Base | With Lolo's and Circle Cut M's wands | With Alternative Magical Girl particles in his body

Retrieved from "https://vsbattles.fandom.com/wiki/Akuta_Rintaro?oldid=4106136"
Community content is available under CC-BY-SA unless otherwise noted.