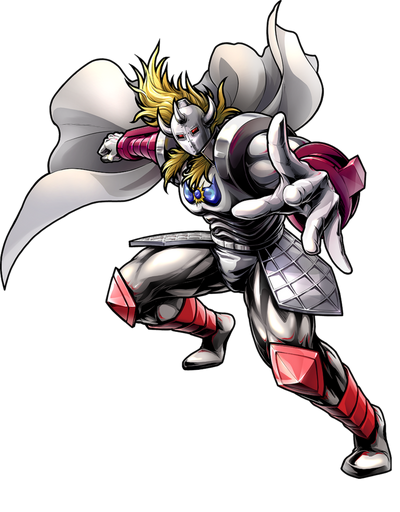 Akuma Shogun is the leader of the Akuma Chojin and the main antagonist of the Golden Mask arc.

Akuma Shogun is actually Goldman, the god of battle and brother of Silverman, who he had a peaceful relationship until the two were asked who was stronger and fought a battle that ended with the two without a body and only as heads. After this battle,the heads of Goldman and Silverman ended up as sacred masks to the Kinniku Tribe, that is, until Satan appeared to Akuma Shogun and offered a body with which he could kill the Seigi Chojin who were founded by his brother Silverman.

And now, with his body and his Akuma Chojin, he plans to do just that.

Tier: At least 7-B, higher with Hardness Levels

Powers and Abilities: Superhuman Physical Characteristics, Martial Arts, Body Control (Can control the hardness of his body), Non-Corporeal (Can fight without a physical body), Pressure Points (His Hell's Nine Point Seal attacks nine vitals points of the body) and Statistics Amplification (Can increase his power when absorbing his six Akuma Knights and even higher when in Hardness Levels)

Speed: Massively Hypersonic with FTL reactions and combat speed (Can keep up with Kinnikuman and even blitz him)

Weaknesses: Can be defeated if someone wears him and take the damage for him

Retrieved from "https://vsbattles.fandom.com/wiki/Akuma_Shogun_(Goldman)?oldid=4702302"
Community content is available under CC-BY-SA unless otherwise noted.