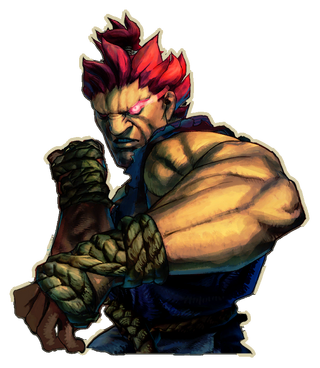 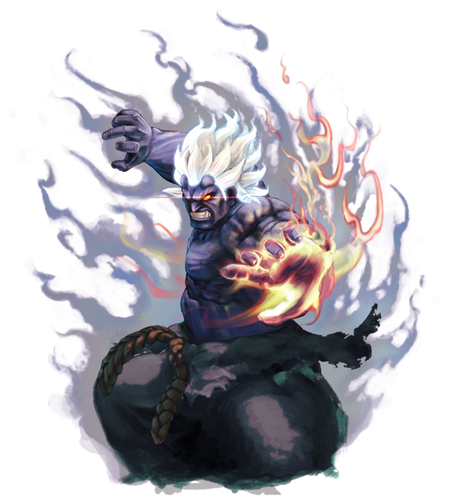 Akuma (悪魔 Akuma, "Devil"), known in Japan as Gouki (豪鬼 Gōki, "Great Demon", "Great Devil" or "Great Ogre"), along with Ryu, both made appearances in Asura's Wrath. Akuma appears as a DLC-only character with his own fleshed out episode, titled The Strongest vs. The Angriest.

Name: Akuma (Gouki in Japan), The Strongest, Destroyer of Heaven

Powers and Abilities: Superhuman Physical Characteristics, Longevity, Acrobatics, Ki/Chi Manipulation (Can channel his Ki into powerful attacks once in a while, such as gaining the height from Shouryuuken or spinning during the Tatsumaki Senpuukyaku), BFR (Used the demon armageddon to create a wormhole that removed Ryu from Akuma and Asura's fight), Master of a assassination martial art known as Ansatsuken, Master of Satsui no Hadou (Surge of Murderous Intent. An innate Ki which increases his fighting capabilities and the strength of his ki attacks, can teleport and but also turns him into a half-demon and can also use the "Raging Demon", the same move that Akuma used to destroy Bison in Street Fighter II), An attack that can destroy the host's Soul if they do not empty their Soul from all negative feelings such as Rage, Hate, Darkness and Desires, Self-Sustenance (Type 1. Can survive in space), Resistance to Extreme Cold and Cosmic Radiations | Even more enhanced, His Hadokens are more electrical based, True Flight, Oni is a theoretical version of Akuma that has been completely overcome by the Satsui no Hado, becoming even more powerful

Intelligence: Gifted (Very skilled combatant. Mastered the deadly Ansatsuken martial arts and even added his own innovations to it, refining it like no other before, experience in fighting many super-powered opponents. Is a master of Satsui No Hado)

Note: This profile is not in continuity, either in Street Fighter or Asura's Wrath. It's a completely separate history DLC (Non-Canon to Asura's Wrath game).

Retrieved from "https://vsbattles.fandom.com/wiki/Akuma_(Asura%27s_Wrath)?oldid=6923359"
Community content is available under CC-BY-SA unless otherwise noted.