VS Battles Wiki
Register
Don't have an account?
Sign In
in: Samurai Jack, Cartoon Network, Adult Swim,
and 44 more 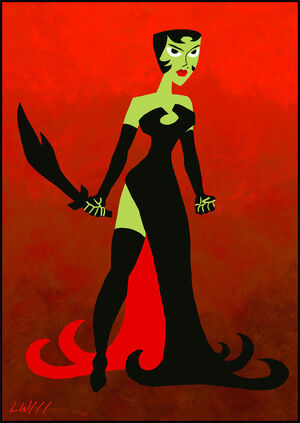 Aku is the central main antagonist of the cartoon Samurai Jack and goes by numerous titles. He was originally a surviving fragment of a primordial evil vanquished by gods, later given sentience by a daimyo who was trying to protect his village from the fragment's continued growth. Aku went on a rampage until he was sealed by the daimyo using a sword created to wound the demon, Aku breaking free a decade later to take revenge. Though the daimyo made preparations for his son to succeed where he failed, Aku sent the Samurai to the distant future where Earth is now under Aku's control.

Name: Aku, Master of Masters, The Deliverer of Darkness, Shogun of Sorrow, Ikra, The Hermit

Classification: Demon, a fraction of the Nameless Evil

Attack Potency: At least Country level (He was the meteor itself who killed the dinosaurs while only a small fragment of his current self)

Speed: Likely Relativistic+ (Can easily keep up with Jack) with Massively FTL+ travel speed (Flew to the Milky Way Galaxy from an unspecified region in outer-space and flew from planet to planet quickly)

Durability: At least Country level. Immortality and regen makes it difficult to kill him (Provided he isn't harmed by something like Jack's Sword, for instance)

Range: Tens of meters normally. Tens of kilometers with beams.

Intelligence: He is as intelligent as he is powerful, and his cunning knows little end, from taking the form of a woman to trick Jack or manipulating various races into serving him. He has no remorse whatsoever about telling someone he will save their village if they obey his command, only to destroy said village as soon as he gets what he wants.

Shinobu Oshino (Monogatari) Shinobu's Profile (Both were 6-B, Shinobu had all optional equipment and some prior knowledge, plus speed was unequalised)