VS Battles Wiki
Register
Don't have an account?
Sign In
in: Tower of God, Characters, Male Characters,
and 32 more 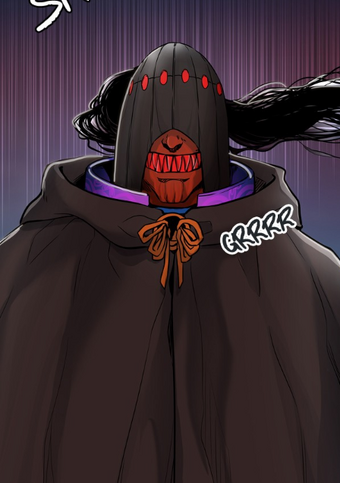 Akryung is one of Headon's underlings who was assigned to help Rachel to get through the Tower. It is unknown what status he maintains in the Tower. It is assumed that he is also an Irregular.

Powers and Abilities: Superhuman Physical Characteristics, Longevity, Large Size (Type 0; Is roughly twice as tall as Rak, who is 3 meters tall), Skilled Hand-to-Hand Combatant, Skilled Spear User, Acrobatics, Shinsoo Manipulation, Statistics Amplification (Like all shinsoo users, he can amplify his physical characteristics and speed with shinsoo), Extrasensory Perception (Can sense beings from Kilometers away), Homing Attack (He can control his shinsoo to have it attack where he desires) | All previous powers and abilities, Immortality (Type 2; Unfazed by Baam's attack, which cut off him in two), Pain Manipulation (Filling an opponent with Shinsoo causes them intense pain), Energy Manipulation/Density Manipulation (By controlling shinsoo, the user can control its very high density), Minor Matter Manipulation (Depending on how much shinsoo can be controlled against the enemy, the user is able to hinder the walk of the opponent), Teleportation, Danmaku (Can attack using multiple baangs), Telekinesis (Can levitate beings or objects), Forcefield Creation (Can use shinsoo barriers to block attacks), Can Negate Spells with Shinwonryu, Regeneration (Mid; Managed to regenerate himself from being sliced off in two by Baam), Purification (Type 2) and Power Nullification (Can nullify curses and other powers with the Shinwonryu. Can dissipate energy attacks), Resistance to the following: Pain Manipulation (Easily resists the effects of Shinsoo, even on higher floors) and Energy Manipulation/Energy Density (Is highly resistant to shinsoo, which is a very high density energy), Minor Resistance to Matter Immobilization (Can move and walk in highly dense Shinsoo areas that would make it difficult to move in)

Attack Potency: Unknown | Likely Island level (Baam stated that he's the strongest C-Rank Regular that he has ever seen. Managed to match Base Baam in a battle of shinsoo, although he was ultimately defeated)

Speed: Unknown | Relativistic (Can keep up with Base Baam and counter his shinsoo techniques from a close range)

Lifting Strength: Unknown | Superhuman (As you go further up the Tower the density of the shinsoo increases, requiring more and more strength to even just walk normally)

Stamina: Very high (Comparable to Base Baam. Did not show any pain reaction to an attack that cut him in half)

Intelligence: High (Superior to Rak in this category. Skilled enough to battle against Baam in a shinsoo contest for a prolongued period of time)

Shinwonryu: It turns out that Akryung is also capable to use Shinwonryu. A technique that was supposed only possible to be learned by Irregulars. Even Baam was surprised as to why Akryung can use Shinwonryu. It's still unknown if Akryung is really an Irregular or not.