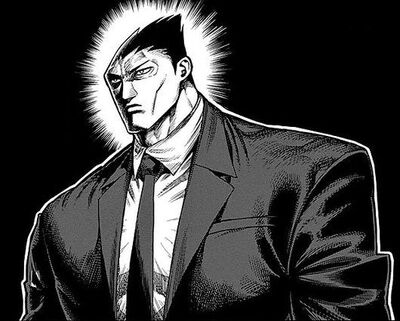 Akoya Seishu, also known as The Executioner, is a police inspector, the captain of the 44th Riot Squad and a secret vigilante that ruthlessly carries out his own brand of justice. He is also the affiliated fighter of Wakasa Life Insurance and represented the company during the Kengan Annihilation Tournament. Akoya is a man who is driven almost entirely by his intense brand of justice and thoroughly judges evil: no matter how seemingly insignificant the crime, even in hindsight, Akoya deems the perpetrators guilty and those that are guilty are executed without mercy.

Powers and Abilities: Superhuman Physical Characteristics, Expert Martial Artist, Aura, Fear Inducement (Induced fear on even Ryuki, who barely knows what fear is) and Weapon Mastery (Taiho-Jutsu is mainly used with addition of a weapon)

Attack Potency: Building level (Acknowledged by Rei to be strong. Should be somewhat comparable to Ohma and Saw-Paing)

Speed: Hypersonic (Shown to be able to blitz this fast)

Stamina: Very high. He is able to execute and kill people day in and day out with barely any rest. His sheer bloodlust makes him very stubborn.

Intelligence: Above Average. He is an excellent captain of the police force, and the best asset Japanese Police Force has. He is able to kill people while being vigilante without being caught.

Weaknesses: He is barely able to contain his bloodlust due to having Dirty Harry Syndrome.

Retrieved from "https://vsbattles.fandom.com/wiki/Akoya_Seishu?oldid=7030839"
Community content is available under CC-BY-SA unless otherwise noted.