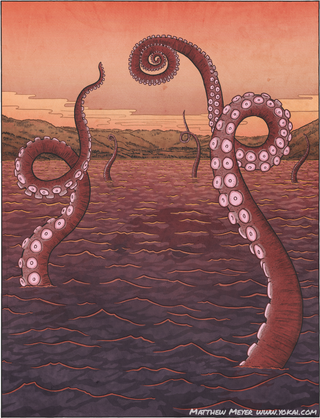 Akkorokamui is an enormous, red, octopus god in Japanese Mythology that lives in Uchiura Bay.

Powers and Abilities: Superhuman Physical Characteristics, Large Size (Type 2), Healing (Would heal followers of skin and limb ailments, disfigurements, and broken limbs if they sent offerings to him), Regeneration (Low-Mid. Could regrow severed limbs), Mind Manipulation (Would offer mental purification for his followers), Shapeshifting (When dragged into the sea by the god Repun Kamuy, he took on an octopus form)

Attack Potency: Large Building level (Said to be a hectare in area and regularly swallowed ships and whales in a single gulp. In his previous form as a spider, shook the village of Rebunge)

Speed: Superhuman (Caught up to and ate whales and ships)

Lifting Strength: Likely Class 100 (Lifted and swallowed whales. Blue Whales can weigh up to 136 metric tons. Stated to be impossible to escape its grasp without his permission)

Intelligence: Would bestow knowledge upon his followers.

Retrieved from "https://vsbattles.fandom.com/wiki/Akkorokamui_(Myth)?oldid=5851135"
Community content is available under CC-BY-SA unless otherwise noted.