Lifting Strength: At least Class 10 (Broke an 8 meters tall column out of a wall within a few seconds by leaning on it)

Weapons: Akitaru has a fit physique, which allows him to face Infernals, despite not having ignition abilities like most other known Battalion Commanders. In battle, he is seen using different weapons, suitable for the situation, like the Core Annihilating Pile Bunker or a fire fighting ax, which he can veil in white steam and thrust at the opponent. His weapons appear to be designed in order to impale an Infernal's core with low difficulty. He is able to carry up to 30kg of equipment each time he is on a mission to fight an Internal. As a firefighter, Akitaru was recognized enough to be decorated twice, though both were revoked due to actions prioritizing saving citizens lives at the expense of defying orders. 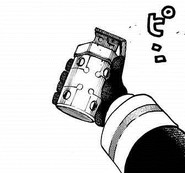 Seven-Style Fire Fighting Battleaxe
Add a photo to this gallery

Retrieved from "https://vsbattles.fandom.com/wiki/Akitaru_%C5%8Cbi?oldid=5798218"
Community content is available under CC-BY-SA unless otherwise noted.