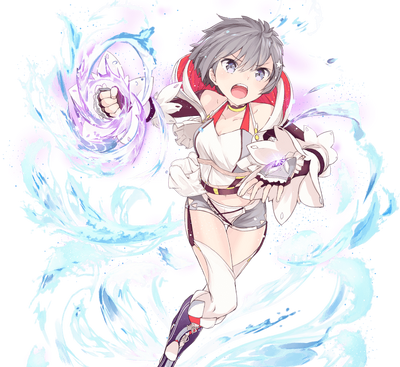 Powers and Abilities: Superhuman Physical Characteristics, Immortality (Type 2, 6, and 7), Self-Sustenance (Type 1, 2, and 3), Magic, Energy Projection (Can create pillars of energy and fist constructs with her Machinegun Fists), Weapon Creation, Statistics Amplification (Can enhance weapons and tools, also through her Connect), Healing (Mid-level), Telepathy, Telekinesis, Transformation, Reactive Power Level (Gets stronger when critically damaged), Portal Creation, Pain Inhibition, Power Bestowal, Extrasensory Perception (Can detect the usage of magic and curses from faraway), Fusionism, Awakened Power, Martial Arts (Is an expert in karate, having participated in it since she was in early elementary), Air Manipulation (Shown capable of creating shockwaves in her transformation sequence), limited Precognition (According to her second awakening, she is capable of reading foes to evade and counter), Information Analysis (Has the ability to target the specific weaknesses of people shes scanned), Water Manipulation (Can create a torrent of water surrounding her punches and kicks), Memory Manipulation (Took the memories of all the people she saved to ensure that they won't be harmed psychologically), Damage Boost (All through her Magia, Connect, and Memoria; though Connect only affects Charged attacks), Damage Reduction (Through her Memoria). Magic, Mind Manipulation, Life Absorption, Status Effect Inducement, and unconventional Soul Manipulation Resistance. Should have the traditional abilities of a Doppel Witch.

Attack Potency: City level (Is a physical brawler capable of fighting the likes of Suzune Amano in close combat, and in fact, was the only ones in Cross Connection capable of doing so. States that she strives to win battles with ideally one hit, which considering she faces against Kamihama witches and familiars on the daily...)

Speed: At least Massively Hypersonic (Somewhat slower than an average familiar without transforming into a magical girl, implied she would blitz one in her side story had she managed to transform), Massively Hypersonic+ combat and reaction speeds (Managed to fight Suzune albeit briefly and by forcing her to fight head-on)

Lifting Strength: At least Class 10 (Felicia's hammer weighs several tons alone, someone who Akira should be stronger than considering that Akira managed to survive a blow from a Berserk form of Felicia)

Striking Strength: City Class (Manage to fight against Suzune's sword with her bare fists. Has killed both familiars and witches only using physical strikes)

Durability: City level (Managed to take several hits from Suzune Amano, but there was an obvious and apparent difference in their attack potency and durability respectively. Also survived a berserker Felicia Mitsuki's rampage in the magical girl's side story), Higher for her Soul Gem (Soul Gems tend to be the most durable part of a magical girl, as their purpose is to provide a safe, compact 'body' for magical girls according to Kyubey. Her soul gem is literally on her fists, taking the brunt of her own attacks)

Stamina: At least Superhuman (Should at least be on par with Homura Akemi, who is rated as one of the lowest in terms of stamina. Can be comparable to Sayaka Miki who is ranked slightly higher. Managed to survive fighting familiars even before becoming a magical girl) Transformation into a Doppel Witch resets the corruption on the Soul Gem, restoring their stamina.

Range: Standard Melee range normally, Extended Melee range with Machinegun Fists. The soul gem can only possess the magical girl's body up to 100 meters away. Interdimensional with Extrasensory Perception (All magical girls can detect witches location from outside of their barriers) Likely several kilometers once she becomes a Doppel Witch.

Standard Equipment: Her soul gem and likely some grief seeds.

Intelligence: Above Average (Is an expert in karate, having practiced it for most of her life and even does image training in her mind. Managed to outmanuever a much stronger foe, Suzune Amano, by forcing her to fight between an alleyway) Doppel Witches generally have a mind of their own in addition to their 'Masters', however it is usually equal to their magical girl form albeit more violent and bordering on the morally gray.

Weaknesses: Destroying the soul gem would instantly kill a magical girl. Doppel Witches only last for a very brief period of time.

Retrieved from "https://vsbattles.fandom.com/wiki/Akira_Shinobu?oldid=6190437"
Community content is available under CC-BY-SA unless otherwise noted.