VS Battles Wiki
Register
Don't have an account?
Sign In
Advertisement
in: Characters, JoJo's Bizarre Adventure, Absorption Users,
and 26 more

Akira Otoishi (音石 明 Otoishi Akira) is a student, one of the many inhabitants of Morioh granted a Stand by Keicho Nijimura using the Stand Arrow. After developing this Stand, Red Hot Chili Pepper, Akira used it to kill Keicho and steal the Arrow for himself, planning to use his Stand for his own criminal purposes.

Powers and Abilities: Extrasensory Perception (Capable of seeing ghosts and souls among some other supernatural forces that are normally otherwise invisible), Power Bestowal (with a Stand Arrow), Capable of communicating through his Stand, Aura, and Summoning (Of his Stand). Red Hot Chili Pepper has Superhuman Physical Characteristics, Electricity Absorption (By absorbing electricity, Red Hot Chili Pepper can boost its own power and heal wounds), Forcefield Creation (It can protect itself with a coat of electricity), Transformation (Red Hot Chili Pepper can transform into electricity to travel between electrical currents), Transmutation (Capable of transmutating objects and people into electricity, allowing it to take them through electrical currents, electrocuting them or releasing them without harm), Technology Manipulation (Can inhabit and somewhat control electronic devices), Invisibility (Stands can only be seen by other Stand Users), Incorporeality (Stands are the incorporeal manifestation of their user's vital spirit, and can only be harmed by other Stands), Non-Physical Interaction (Stands can interact with ghosts and other Stands), Regeneration (At least Low-High; after being dispersed throughout the ocean, Red Hot Chili Pepper was able to pull itself back together and attack Joseph through a light fixture), Limited Flight (Within its effective range), Aura

Attack Potency: Athlete level. Varies, at least Building level with Red Hot Chili Pepper (When charged up, it could dismember The Hand and fight against Crazy Diamond. While not as strong, after slowly powering up for nearly a month, he thought he was encroaching Jotaro Kujo's power though admitted to not being quite strong enough yet and being confirmed to still be not as strong elsewhere), up to Large Building level with enough electricity (When charged up on Morioh's electricity, Red Hot Chili Pepper overpowered Crazy Diamond)

Speed: Varies (Speed is directly proportional to how much energy he has absorbed, increasing or decreasing relative to the amount he has drained), at least Relativistic+ up to Speed of Light (Can travel through wires at the speed of light and is completely conscious while doing so, being able to pick and choose where he emerges from even at short distances), FTL with enough electricity (His speed increases proportional to the amount he absorbs, with enough making him demonstrably faster, blitzed The Hand)

Durability: Athlete level. Varies, at least Small Building level (While weakened, it could take numerous blows from The Hand. It can take blows from Crazy Diamond who is comparable to it with a moderate charge), up to Large Building level with Red Hot Chili Pepper

Stamina: High. Even after Red Hot Chili Pepper was seemingly destroyed by being dispersed throughout the ocean, Akira was able to stay standing, and then infiltrate Joseph's boat to carry out his assassination. He was also able to forcibly reset his pinky after Josuke broke it, and then use it to play a guitar solo.

Range: Standard melee range, Hundreds of meters with Red Hot Chili Pepper (It can stray this far from Akira)

Intelligence: Akira is a clever and devious fighter who makes intelligent use of his Stand, being sure to confront his opponents in areas where electrical lines are available to attack them from all sides and so that he has a source of power. Besides this, he is an exceptional guitarist and lives up to his boasting on that front.

Weaknesses: Akira is somewhat overconfident and can slip up due to his pride. Any damage taken by Red Hot Chili Pepper will be reflected onto Akira, and his Stand must constantly have a supply of electricity to stay alive. The farther Red Hot Chili Pepper is from a power source, the faster its power will drain. A thick enough insulator, such as rubber, can be used to contain Red Hot Chili Pepper, while a vast conductor, such as the ocean, will forcibly disperse it throughout, severely damaging it and Akira. This is not lethal for either, however.

Red Hot Chili Pepper: Akira's Stand, a short yellow humanoid with a beak and tail, covered in a crackling electrical glow. A long-range Stand, it can stray far from Akira, all while, thanks to its ability, maintaining a deadly close combat ability. 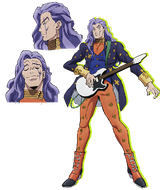 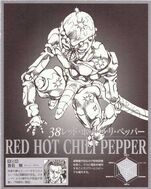 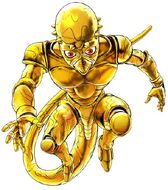 Akira's Theme in All Star Battle

Akira's Theme in Eyes of Heaven