VS Battles Wiki
Register
Don't have an account?
Sign In
Advertisement
in: Tier 7, Tier 7-C, Tier 6,
and 16 more

Akira Kongou is the main character of the series, Kongou Banchou. He is a part of the Kongou species and also the fourth Kongou to don the name of Banchou. He is one of the strongest of the banchou second to only Nippon Banchou (his older brother whom he later defeats). He is a very caring person willing to sacrifice himself in order to protect those he cares about be it jumping from large towers to letting people hit him he will relentlessly do whatever it takes to protect his friends.

Classification: Kongou, Participant of the 23rd District Project, Leader of the Kongou Alliance

Powers and Abilities: Superhuman Physical Characteristics, Able to vastly augment his physical capacity by growing in size (can become more than 300 meters tall), Can harden his body by flexing his muscles (greatly enhancing his durability as well as augmenting his damage inflicting capacity with physical offense, by virtue of his adamantine body), Ace Hand-to-Hand fighter, Resistance to Electricity (Tanked an extended Riot Hold from Machine Banchou, was also completely fine after powering an elevator by connecting an active severed high-voltage power-cable with his body), Regeneration (Low-Mid; healed a broken arm, blinded eyes and other injuries whilst unmoving taking continuous attacks from Hikyou Banchou, also came back from the "dead" after having a fist pierce completely through his chest and his heart being stopped for over 24 hours), Indomitable Willpower (Huge tolerance for pain, perfectly fine battling it out with Hakai Banchou in close-quarters whilst standing on broken legs, broke free of Sasori's Scorpion Finger, which completely immobilized him, through sheer power of will, unyielding determination etc), Limited Reactive Evolution (His bodily capacity can increase drastically in miniscule time frames when pushed, went from being offhandedly overpowered by Hakai Banchou to matching him in a close-quarter brawl in minutes at most, grew significantly stronger after being "killed" by Machine Banchou, etc.).

Attack Potency: Town level (His clash with Hakai Banchou shook the island they were fighting on within the first few punches) | At least Town level, possibly higher (Far stronger than in base, outright destroyed Hakai Banchou with a Double Hammer. Managed to be on par with Machine Banchou with this form.) | Continent level+ (The Double Hammer Clash between him and Takeshi split the entire landmass of Japan down to the Earth's core. They also caused various tsunami's and volcano eruptions to occur as well)

Striking Strength: Town Class (Caused an earthquake alert in Tokyo when he traded punches with Hakai, once struck the ground so hard that the water pipes far beneath him busted all at once, and smashed a wrecking ball into Hikyou with extreme force by only flexing his chest muscles, etc.) | At least Town Class (Punched Hakai to bits and pieces) | Continent Class (His fight with Takeshi caused planetary effects)

Durability: Town level (Withstood dozens of consecutive punches from Hakai Banchou, tanked a huge explosion), regeneration also makes him hard to kill | At least Town level, possibly higher (Much tougher than in base form) | Continent level+ (Withstood many attacks from Giant Mode Takeshi, for example, being punched around the planet at high speeds, atmospheric re-entry, being smashed around from his attacks, etc)

Stamina: Extremely large, can endure insane amounts of punishment and keep fighting (Although this has only been twice in the entire series)

Intelligence: Expert fighter, something of a battle genius, overall perceptive and fairly intelligent, but his knowledge of technology is underwhelming

Weaknesses: Takes at least a few seconds for his regeneration to work its magic (e.g. it took him 10+ seconds to heal two broken legs, took a full day to regenerate and come back alive). Is not very good with technology (ex. doesn't know how to use a flip phone). 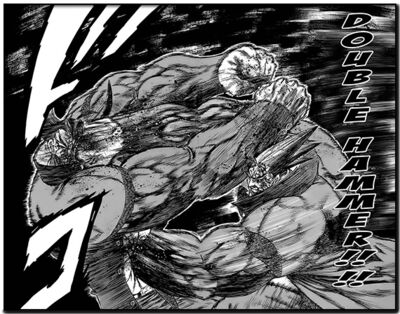 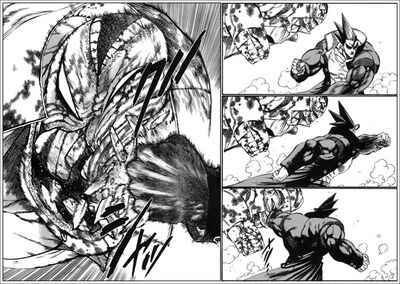