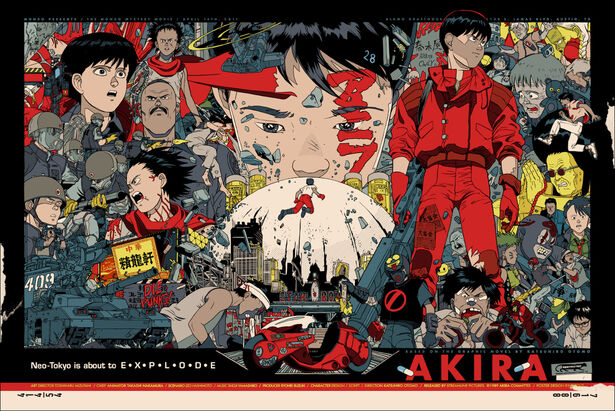 Akira (often stylized as AKIRA) is a Japanese manga series written and illustrated by Katsuhiro Otomo. Set in a post-apocalyptic Neo-Tokyo, the work uses conventions of the cyberpunk genre to detail a saga of turmoil. Initially serialized in the pages of Young Magazine from 1982 until 1990, the work was collected into six volumes by its publisher Kodansha. The work was first published in an English-language version by the Marvel Comics imprint Epic Comics, one of the first manga works to be translated in its entirety. Otomo's art is considered outstanding, and a breakthrough for both Otomo and the manga form. Throughout the breadth of the work, Otomo explores themes of social isolation, corruption, and power.

An animated film adaptation (anime) was released in 1988 which shortened the plot considerably, but retained much of the main character and plot structures from the manga as well as many original scenes and settings. The manga takes place in a longer time frame than the film, and involves a much wider array of characters and subplots. Otomo's Akira anime marked his transition from a career primarily in manga, to one almost exclusively in anime. (Link)

The manga has mainly Street level characters, with weapons of mass destruction that can devastate large areas. Nuclear bombs exist in this world, but the beings with the greatest powers are Akira and Tetsuo. Tetsuo's power grows from Street level to finally Universe level+ at the end of the manga when he becomes a universal abstract being. His final power is comparable to Akira, thus resulting in likely two Low 2-C beings with strange mental powers. Tetsuo's power are not really physical (i.e., no punches or kicks) but rather the use of telekinesis, teleportation and a host of other mental abilities. In this verse, there are multiple characters (and many more past existing people) who have Esper powers such as telekinesis, teleportation and telepathy. Some have grown to such an extent that merely misusing them by even a tiny amount (such as experiencing shock or having angry thoughts) results in colossal damage (as seen when Akira, in the incident of the death of his friend gets a mere mental shock which destroys a large part of Tokyo). In terms of speed, soon after getting some control over his powers, Tetsuo is seen to be able to react to light beams. But the speeds of the Top and God Tiers are unknown. The Mid tiers tend to be merely Peak to Superhuman.

In the movie, however, Tetsuo remains relatively low in his power, and in the end, is involved in a city-sized explosion, and then suddenly jumps to Universe level+ level of power in the very end of the movie (because the end was highly condensed compared to the manga).