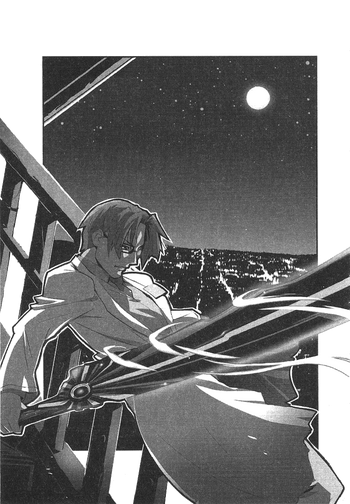 Kashima Akio is 2nd Gears strongest military god and swordsmith, as well as a leading engineer of UCAT's development department.

Powers and Abilities: Superhuman Physical Characteristics, Weapon Mastery, Stealth Mastery, Can cut through anything, Can create charms that protect against weapons of lesser quality

Attack Potency: Multi-City Block level (Is the strongest military god in 2nd Gear and wields the most powerful sword in 2nd Gear. Hence he scales to all other feats of 2nd Gear weapons)

Lifting Strength: Peak Human (Can easily swing a sword as large as Futsuno with one hand)

Intelligence: High (A master swordsmith and an engineer of UCAT's development department, which deals with the development of concept weapons)

Weaknesses: Futsuno can not cut through things with names of higher power that protect the object, such as a disk with all names of 2nd Gear on it.

Note: Most of the above abilities are only possible if he fights in a space that possesses 2nd Gears concepts.