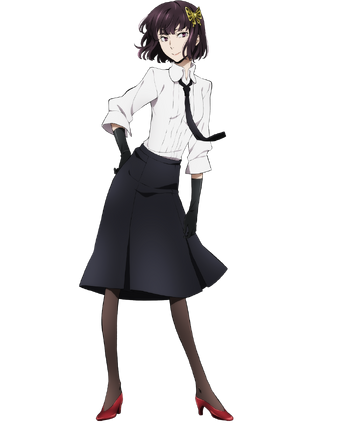 Akiko Yosano is the Armed Detective Agency's in-house physician and is fiercely protective of the lives of her patients. However, she's also known to have sadistic and aggressive tendencies, and her treatment method requires her patient to be half-dead first, leading the entire Agency to be terrified of receiving aid from her.

Attack Potency: Street level (Casually defeats scores of Port Mafia grunts alongside the rest of the Agency even though said grunts are comparable to national special ops units)

Speed: Hypersonic+ to High Hypersonic (Comparable to other members of the Detective Agency, easily reacts to Port Mafia grunts and defeats them with minimal injuries)

Durability: Street level (Can be harmed by bullets and explosions but easily handles most people in close combat)

Stamina: High (Like the rest of the Agency, dealing with hordes of special ops agents is a cakewalk for her. She can easily stand up after surviving a point-blank explosion)

Standard Equipment: A handbag full of bladed weapons of all shapes and sizes.

Intelligence: Akiko is an experienced physician who can diagnose a wide variety of illnesses. Nevertheless, she rarely needs to use this due to her Ability, but her medical knowledge allows her to slash her targets with surgical precision to disable her targets and avoid killing them so that she may use her Ability on them if necessary. On the flip side of things, her innate sadism along with the nature of her Ability makes her an expert at interrogation, scaring the daylights out of all but the most fearless of Port Mafia's ranks.

Weaknesses: Akiko is somewhat sadistic and overly aggressive at times, Thou Shalt Not Die can only activate if she or her target is already on the verge of death and won't activate if she's already dead.

Retrieved from "https://vsbattles.fandom.com/wiki/Akiko_Yosano?oldid=4796170"
Community content is available under CC-BY-SA unless otherwise noted.